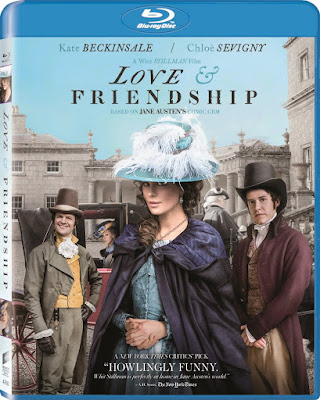 Part of what makes it possible for Stillman to accomplish this is by remaining focused on the title character, despite changing the title. Lady Susan Vernon (Kate Beckinsale) is a beautiful young widow and manipulative meddler that you would expect to see in an Austen novel, though primarily as the antagonist, with a more sympathetic character as the protagonist. This sympathetic character is Susan’s daughter, Frederica Vernon (Morfydd Clark), who is driven by emotions rather than shrewdly calculated advances in social standing. In other words, Susan is what I imagine Emma would turn out to be without the completion of her character arc through romance. There is no redemption necessary for Susan, because Stillman’s focus on humor rather than romance allows us to be amused by her untrustworthy manipulations.

As one would expect, a majority of these manipulations involve Susan playing with the hearts of men. After becoming tripped up in the games she is playing with an eligible (although not entirely unattached) young bachelor, Lord Manwaring (Jenn Murray), Susan makes the sudden decision to visit her brother’s family living in the countryside. Her visit is not entirely welcome, especially by her sister-in-law, Catherine DeCourcy, whose suspicions about Susan’s motives are quickly multiplied. This has a great deal to do with Susan’s immediate flirtation with Catherine’s brother, Reginald (Xavier Samuel), a handsomely wealthy prospect for the widow.

Susan has her own competition when her daughter suddenly arrives to join her, stealing away the attention of Reginald. In response, Susan begins to orchestrate another suitor for Frederica in the form of the wealthy but silly Sir James Martin (Tom Bennett). In true fashion of the era, all of these battles are played out with extreme civility. I can’t imagine Stillman having the tools to adapt any of Austen’s more romantic tales, but few filmmakers are better suited for this narrative. The humor remains biting without ever making the characters so unlikable that they become unpleasant to watch. In some ways, Stillman has captured the true tone of Austen’s work as few filmmakers ever have.

With a film that relies so heavily upon dialogue, the importance of casting is more noticeable than usual. Beckinsale is a whirlwind of precise and controlled energy, carrying much of the movie save a few scene-stealing moments from the hilarious Tom Bennett. Beyond these performances, Love & Friendship is a film with production values that far exceed the budgetary limitations. There are countless custom-made dresses and gorgeously fitting locations, fulfilling the quota of period-film eye candy.

The Blu-ray release puts these assets on high definition display. Unfortunately, there are few other perks to this upgrade in quality, as the only special feature is a behind-the-scenes featurette which is just under ten minutes long.