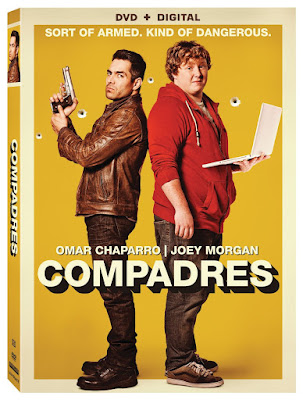 At the center of these demeaning depictions is the film’s protagonist, a Mexican cop named Garza (Omar Chaparro) who somehow attracts large-breasted women to offer their bodies to him everywhere he goes. After the death of his partner, Garza takes a gorgeous bartender (Aislinn Derbez) up on this offer, until she is kidnapped by the same crime lord, Santos (Erick Elias). Santos also frames Garza for a crime he didn’t commit, forcing the cop to break out of prison and escape to the United States for help.

Vic (Joey Morgan) is a seventeen-year-old American hacker who inadvertently helped steal $10 million from Santos, putting him on the run from the same people who framed Garza. The former Mexican cop and the teenage hacker pair up, making an unlikely team to stop Santos’ powerful international crime ring. Though this may sound like the setup for a highly comedic film, Begne often chooses to focus on the action instead. At times the extremity of the violence misjudges the tone of the rest of the film, though it keeps things moving in the narrative.

There is some humor along the way, but a majority is reserved for the supporting cast. The buddy element between Vic and Garza is more heavily steeped in melodrama than laughs, and their friendship is a bit too contrived. Some of the film’s humor may be lost in translation, as it seems most comedic roles land on the Spanish-speaking side. The violence is universally unrealistic, but it is done in a way that is occasionally comical, and also provides a majority of the movie’s spectacle.

The DVD release of Compadres comes with a Digital HD copy of the film.