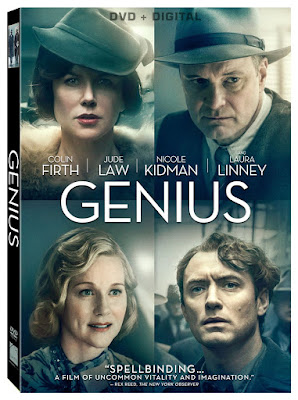 The film begins with Perkins (Colin Firth) reading the novel of an ambitious new writer, Wolfe (Jude Law), and deciding to publish the work. Those unfamiliar with the process of publishing a novel might assume that this is all there is, but Perkins took an active role as an editor in shaping Wolfe’s final result. They worked together closely, bickering about length and the necessity of certain passages of prose, and ultimately publishing “Look Homeward, Angel,” which went on to be highly praised and well received. This process was repeated tenfold for Wolfe’s second novel, which threatened to destroy his marriage to Aline Bernstein (Nicole Kidman).

We are also privy to the family life of Perkins, married to the supportive Louise (Laura Linney) and father of four girls of varying ages. This dynamic is often in stark contrast of the relationship between Bernstein and Wolfe, which is volatile. It also shows the kind of man that Perkins was, as dedicated to his family as he was his work. Wolfe was a man obsessed with his own work, often narcissistically so. And both of these actors play into the odd-couple dynamic provided by these attributes, providing the film an unlikely friendship as the core of the narrative.

Wolfe was not the first literary genius that Perkins had worked with, and it shows the negative side to the pressures of fame and celebrity in the faded talents of F. Scott Fitzgerald (Guy Pearce). Perkins was also an editor to Ernest Hemingway (Dominic West), whose demeanor is far less depressing in this film, though knowledge of his eventual fate must cast some doubts about the sincerity of his attitude. These characters only make brief appearances in the story, but they serve a dual purpose. They show how Perkins cared about his writers beyond what fame and fortune they might provide, and they foreshadow a fate that Wolfe’s arrogance may guarantee him. Ultimately, this is a film about creative drive, though it doesn’t have a screenplay willing to investigate the themes with the same dedication as the cast.

The DVD release of Genius includes two featurettes, praising key figures in the making of the movie. There is a featurette about Grandage, while the other investigates the real-life characters featured in the film. Both are around 15 minutes in length.