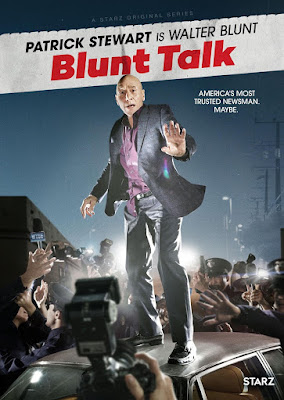 “Blunt Talk” follows the comedic melodrama in the life of a British newscaster working for a cable network in the United States. Extremely wealthy and overindulgent, Walter Blunt employs a manservant (Adrian Scarborough) who has faithfully followed him since their time together in the Falklands War. Although Blunt wants to use his power as a celebrity and newscaster to change the world, he spends an exorbitant amount of time simply getting wasted with his servant in Los Angeles. This makes the premise for “Blunt Talk” a strange combination of the movie Network and the TV show “Entourage.”

After the news celebrity is caught in a media scandal, Walter tailspins in a series of unpredictable misadventures with his servant and his show’s oddball staff. Rosalie (Jacki Weaver) is his motherly manager, constantly cleaning up after him. Celia (Dolly Wells) is the show’s promiscuous senior producer, and Jim (Timm Sharp) is the head writer struggling with a hoarding problem. Each of these characters has their own quirky subplots to match Walter’s crazy celebrity lifestyle.

The novelty of watching Stewart play such a cartoonish role is not quite enough to hold the series together, and about halfway through the first season my interest began to wane. Thankfully, the writing improves some as the season continues, creating more compelling situations and hints at each character’s humanity. It is enough to make us care about them, and possible to continue watching next season.

There are 10 episodes in season one, all included in this two-disc DVD set. Season two begins on October 2nd, allowing plenty of time to catch up on the first season. The special features included on the DVDs are four featurettes, including one that was clearly made for promotional purposes before the show had aired.