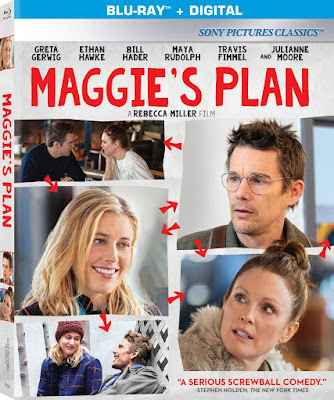 Maggie (Gerwig) actually has several different plans over the course of the film, each more selfish than the last. When Maggie grows tired of waiting for the right guy to come along, she impulsively decides to impregnate herself with the help of an uninvolved friend from high school (Travis Fimmel). Shortly after making this decision, Maggie falls for a married writer named John (Ethan Hawke). The story then jumps forward several years to an unhappy Maggie attempting to play housewife and mother to John’s two children, and one of her own, which very obviously came from Maggie’s “plan,” despite the film treating this like a surprise in the final moments.

Even worse than Maggie’s willingness to destroy John’s marriage with likeminded literary scholar, Georgette (Julianne Moore), is her indecisiveness. After a few years having him as her own, Maggie comes up with another plan to reunite John and Georgette so that she can have her freedom back. Technically, I suppose that would make this film a screwball comedy, as the sub-genre was also referred to as “comedy of remarriage.” But although the movie becomes about the reunion between married couple, the banter of the dialogue never comes close to the cleverness of the 1940s. Instead, this simply feels like watered down Woody Allen: a bunch of narcissists cheating on each other until eventually ending with a partner once the jazz soundtrack finally stops forcefully insisting that the entire endeavor is lighthearted.  If you like Gerwig movies or the cynical style of Woody Allen romances, Maggie’s Plan may be your kind of movie, however uninspired much of the script may be.

Some actors are chameleons, disappearing into each role in such a way that we hardly recognize them. Others play the same character every time, and we essentially know them for being themselves. I don’t think I would recognize Gerwig if she weren’t playing an idealistic selfish New Yorker. The fact that she has mostly worked with Noah Baumbach since breaking up the director’s own marriage makes the role of Maggie even closer to her personality than usual, even if this particular film is directed by Rebecca Miller. Miller is daughter to famous playwright Arthur Miller, but it is Woody Allen’s shadow she remains in with Maggie’s Plan. Moore is the one who comes off looking the worst in Maggie’s Plan, because she attempts to become a chameleon actress with painful results. The role of Georgette is Danish, but Moore’s accent ends up sounding like a bad caricature of a German. Gerwig’s approach to play herself may be obnoxious to those who don’t necessarily like her personality, but it doesn’t make her a bad actor, just one that I don’t particularly enjoy because of the roles is drawn to.

The Blu-ray release includes a Digital HD copy of the film, along with the special features included on disc. There is a commentary track with Miller, along with a Q&A from the Sundance Film Festival. There is also a making-of featurette and an outtake reel.