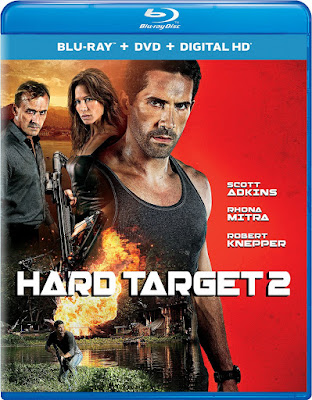 Hard Target 2 is essentially just another mindless remake of The Most Dangerous Game, which has been adapted from Richard Connell’s story countless times since the 1930s. Although there are humans being hunted in the first Hard Target, there was at least a bit more complexity to the storyline. It involved a black market of organ sales and a law enforcement strike opening up New Orleans to an all-out battle on the streets. Hard Target 2 simply has a group of hunters trying to kill a human being for sport in the jungle. Within that simplicity are the film’s greatest assets and faults.

Beginning with a great deal of unnecessary back-story involving an MMA fight ending in tragedy, we are introduced to our new protagonist, Wes Baylor (Scott Adkins). After accidentally killing his friend in the ring, Baylor has resorted to taking dangerous underground fights as a way of repentance. Baylor thinks that he has signed up for a fight in Myanmar, but he shows up to find himself the prey in a game for wealthy hunters. They are led by the man who organized the hunt, Aldrich (Robert Knepper), who is willing to cheat to ensure none of the hunted survives. Baylor and others must attempt to survive, despite being outnumbered and without weapons against a group of advanced hunters.

The original film included a great deal of gunplay, living up to Woo’s tradition of bullet-ballet action. While Hard Target 2 does have a few moments that are an obvious homage to the original (including the timely appearance of a few slow-motion doves and a motorcycle showdown), the preference for action style leans more towards martial arts than gunplay. This should be an obvious shift, not just because of the casting of Adkins, but because they make his character a MMA fighter looking for redemption. He finds salvation from his past by kicking countless bad guys in the face, pretty much the exact way he killed his friend. And he does it with the kind of style that makes Adkins the perfect actor to follow Van Damme. Overall, this is a polished action film, but it is also fairly predictable and narratively uninspired.

The Blu-ray release offers up a high definition presentation of all the slow motion explosions and manly leaps through the air. The special features feature a commentary track with director Roel Reiné, who has become a favorite director for Universal direct-to-video releases, along with Adkins, Knepper, and others. Also included are a handful of deleted scenes and featurettes. There is a featurette on the location shoot in the jungle, a behind-the-scenes look at some of the action, and some generic promotional extras. Along with the HD disc, there is also a DVD and digital copy of the film included.