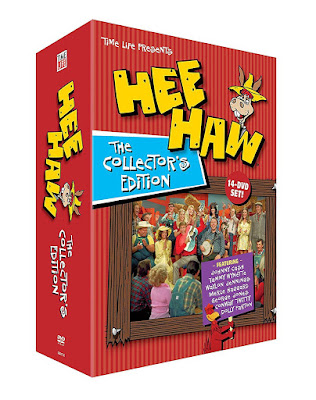 This country-themed variety show first aired on CBS in 1969, and though its initial run only lasted 2 years, “Hee Haw” then went into first-run syndication until 1997. Adapted as a loose satire of “Rowan & Martin’s Laugh-In,” “Hee Haw” became a corny classic of its own, blending comedy sketches with musical performances from some of the most well respected names in country music. Led by hosts Roy Clark and Buck Owens, along with regular guests and cast members, each week brought musical performances and laughs, both unintentional and not. Lovers of classic country will rejoice over the release of this Collector’s Edition DVD, including a sampling of the best the show had to offer.

The “Hee Haw” Collector’s Edition actually includes three previously released DVD sets in one large collection, making a concise purchase for those did not previously buy the individual releases. These sets include the 7-disc “Hee Haw Collection,” a 6-disc release of “Kornfield Klassics” and a disc of “Hee Haw Laffs.” These 14 discs may not include a complete chronological release of the episodes, but they do compile an impressive number of the show’s most popular skits and musical guests. All existed in the fictional setting of Kornfield Kounty, which was full of hardworking hicks of all sorts. Among this population mingled the visiting musical stars of country music, as well as the Hee Haw Honeys, beautiful young women who brought G-rated sexual innuendo along with the musical performances.
As humorous as some of the sketches may be (and as terribly cheesy as the rest are), the highlight of this show was and remains the musical performances from some of the greatest names in country music. At the top of this list are Johnny Cash and Dolly Parton, although there are also appearances by Kenny Rogers, Hank Williams Jr., Conway Twitty, and even Ray Charles. The hosts and the Hee Haw Honeys also joined in on the musical performances, and the special features in this set include the first episode in which Owens and Clark perform “Pickin’ & Grinnin,” along with a bonus DVD with the pilot episode featuring Loretta Lynn and Charley Pride.

Other bonus features include interviews with the original cast members, along with some of the early sketches. While the collection doesn’t feel entirely complete, that might be asking too much of a show that aired for as long as this one did. Instead, this is the best available collection of the show’s best moments. While some of the discs have repeated skits, each of the sets in the collection do a fairly good job of bringing out the elements that originally made this show such a hit. This is a must for country fans, but may also provide additional nostalgia for those who witnessed the show during its original broadcast.