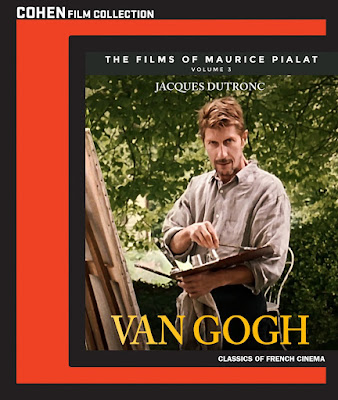 Even by the 1990s the biopic was already something of a predictable sub-genre, just as it has now become traditional fodder for award season. Even in 1991, Maurice Pialat’s Van Gogh was rather innovative in the approach toward a typical narrative of the struggling artist. Nearly every biopic of an artist or a musician that I have seen in the last decade has included some of the same elements of Van Gogh (addiction, suffering, depression), but Pialat doesn’t dwell on the melodrama as others did before him and have since. While Vincent Van Gogh may have even been more tortured than the rest, Pialat doesn’t sensationalize this for dramatic purposes. Instead, he shows us a fairly uneventful recreation of Van Gogh’s final days.

Beginning after Van Gogh’s release from his final stay at a mental asylum, Pialat’s film gives a naturalistic depiction of the artist’s final three months living in Auvers-sur-Oise. The rural country provided the artist (played by Jacques Dutronc) with plenty to paint in the final days leading up to his suicide, and he also builds relationship with a local doctor who is also a patron. Van Gogh has an affair with the doctor’s young daughter (Alexandra London), along with continuing his patronage to a prostitute from the city.

Van Gogh drinks and has affairs with little dramatic consequence. There are no major outbursts or accusations of infidelity, as one would expect from most biopics about suffering artists, though his tumultuous relationship with his brother is the closest the film gets to these expectations. Art seems always to be Van Gogh’s biggest concern, and his brother Théo Van Gogh (Bernard Le Coq) was far more successful in the world of dealing art than the sibling was at being an artist. Of course, years later Van Gogh would be celebrated, but he never saw that success in his lifetime.

The struggle to make a living as an artist weighs Van Gogh down in the last months depicted in Pialat’s film, but it also seems to make him resentful to see his brother’s success paired with a happy home life. All of this is handled with the same simplicity and discretion as the rest of the film, including Van Gogh’s anticlimactic death. The natural approach is paired with a length 159-minute run time, allowing the narrative and character development to slowly wash over the audience. Because the film only focuses on a short period of his life, there is no pressure to include a number of significant moments or facts. All of these elements paired together make for an unrushed slice-of-life piece of cinema.

The Blu-ray release comes as Volume 3 of The Films of Maurice Pialat collection, including two discs and a booklet insert. The first disc includes the film, with the second reserved for the special features. These extras include interviews with Dutronc, Le Coq, cinematographer Emmanuel Machuel, and director Xavier Giannoli. Also included are a few deleted scenes and trailers for the film.