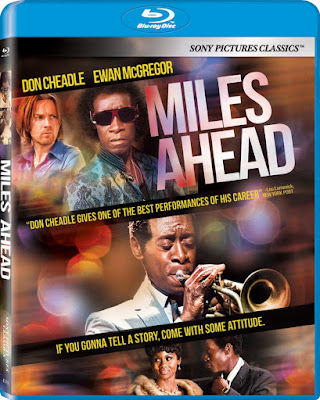 Although just as much of the running time is spent in flashbacks of his past, the primary narrative framing the film takes place in the late 1970s after Davis had already taken a five year break from music. With a bit of fictional adventure tossed in with a lighthearted edge rarely seen in these films, we join a hermit-like Davis as his privacy is disturbed by an opportunistic music reporter named Dave Braden (Ewan McGregor). After attempting to lie his way into an interview with Davis, Braden ends up entangled in the jazz legend’s life over the course of a couple days. The pair set out on a mission to retrieve stolen tapes of the latest music recorded of new Davis material.

The remainder of the narrative is the interspersed flashback sequences of Davis at the peak of his success. Along with the usual drug and alcohol abuse, Miles Ahead is also guilty of including another favorite cliché of the artist narrative. There is always a perfect romance from the past which is often lost due to the aforementioned addiction, along with adultery. In Miles Ahead, this is Frances Taylor (Emayatzy Corinealdi), Davis’ dancer wife that he stifled and cheated on. Ironically, these moments feel more fabricated due to their generic qualities, despite being far truer than anything in the 1970s section of the film.

Miles Ahead is a creative approach to variation on the genre, often very obviously self aware in this attempt. While far from perfect, it does just enough to make Cheadle’s showcase a success. His performance is solid without overtaking the film, which also shows restraint in the screenwriting. The direction is a bit over-ambitious stylistically, but also suggests a promising future for the actor as a filmmaker. If Miles Ahead was a vanity project, it served its purpose well enough for Cheadle to have options in the future.

With the addition of the caper elements into the story, there is less time for sequences of music, though Davis’ work is sprinkled throughout the soundtrack. The soundtrack is probably the biggest asset of the film’s high definition on Blu-ray. The disc’s special features include a Q&A from Sundance, a featurette on Cheadle’s transformation into Davis, and a commentary track with Cheadle and co-writer Steven Baigelman. The release also comes with a digital HD copy of the film.