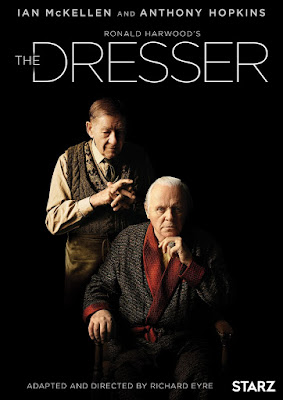 Cinema has a long tradition of borrowing from the theater, but the two mediums don’t always line up perfectly. Film is a far more visual medium, and the dialogue-heavy stories from the stage can often be noticeably stagnant onscreen. This easily could have been the case with The Dresser, Richard Eyre’s TV movie adaptation of Ronald Harwood’s stage play, had the casting been any different. Ian McKellen and Anthony Hopkins often approach the material with the rawness only seen in live performances, but also give the subtle nuances often lost without a camera or front row theater tickets.

The film follows the behind-the-scenes drama unfolding during a small English regional theater production of King Lear during World War II. Although there are bombs falling outside within earshot, every effort is made to continue on with the show. Even more disconcerting than the war is the tardiness of troupe’s missing star, an aging actor referred to only as Sir (Hopkins). Despite resistance from many in the production, including Sir’s own wife (Emily Watson), the actor insists on continuing when he finally emerges in a confused state. Unable to function on his own, Sir relies on his faithful dresser, Norman (McKellen), a man who has the dialogue and stage cues memorized on top of handling the star’s make-up and wardrobe.

Much of the film is spent in the dressing room as these two men prepare for each obstacle of the show. Other members of the cast (including Sir’s wife) pay visit, some offering flattery and others criticism, but all wanting something. Much of the film, however, is just these two men talking. Honest discussions of the life of an actor reach peak poignancy as it is clear that Sir is near the end of his journey down this path. Norman provides a distinctly different voice as a sounding board, giving the film its strongest sequences of acting from the best writing of the play. At times the additional characters in the film/play are a distraction from these conversations, with some subplots never developing to the point of interest.

The DVD release of this thoughtful TV film adaptation also comes with a couple of featurettes, including one about the adaptation process from stage to film. My only criticism of this production likely comes from a lack of funds, though part of me does wish that the production design and cinematography had the ability to match the performances.