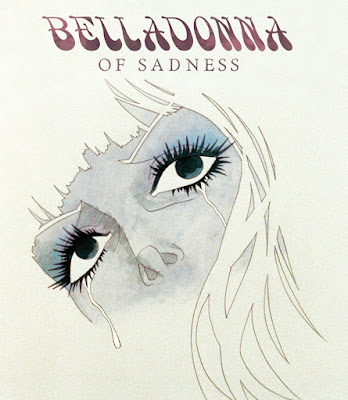 There is little reference for a film like Belladonna of Sadness in modern cinema, a psychedelic adult animated feature from 1973 which is equal parts exploitation and art film. One could easily find the influence of director Eiichi Yamamoto’s film in modern manga and anime, and somehow Belladonna of Sadness still remains unique in its style and tone. The film exists in the world of exploitation, but titillation rarely seems to be the purpose of the shocking imagery. Mixing psychology with the supernatural in order to tell an erotic tale of revenge, this is a cult film unlike any other, now or then.

Inspired by the non-fiction Jules Michelet book, “Satanism and Witchcraft,” the story follows the moral decay of an innocent young woman following a violent rape. The film begins with happiness that does not last, introducing us to newlyweds Jeanne and Jean before despicable actions alter their path. The couple lives in a rural village and has simple aspirations until Jeanne is ritually gang raped by the local baron on her wedding night. Helpless to do anything, Jean simply suggests that they put the violent assault behind them, but the resentment and pain eats away at Jeanne until she is visited by a tiny phallic creature feeding off of her anger.

This small creature shaped like a penis is Satan, and he begins to grow as Jeanne’s soul becomes corrupted by her feelings of hatred and acts of vengeance. The larger that Satan grows, the more powerful Jeanne becomes, though it comes with the price of increasingly violent sexual assault as the penile Satan also grows in size. This unimaginable cost provides her the ability to fight back against the evil baron and his court of followers. The biggest difficulty in relating to the narrative is the bleak lack of moral characters to root for, ultimately focusing on the darker elements of humanity.

As adult as the themes of Belladonna of Sadness may be, the animation is geared towards experimental rather than realistic. This allows the horrendously violent and sexual sequences to be portrayed with metaphoric voracity without becoming too graphic. The shock value comes more from the moral degradation than from visual realism of the situations. This also allows for more artistic freedom in the animation process, which is often more of an acid nightmare than traditional animated narrative films. Audiences today may have grown more accustomed to seeing this type of surrealist cinema in the music video medium, but even today Belladonna of Sadness is a surprisingly unique film. In some ways the film does resemble a music video in feature form, as the story is often driven along by an experimental jazz and rock score by composer Masahiko Satoh.

Animation is one of the few genres that high definition presentation is visibly superior, and the new 4K restoration of Belladonna from the original 35mm camera negative is as sharp as any animation from the early ‘70s. An additional 8 minutes of footage was also added back into the release, previously cut from the original negative. The special features for the Blu-ray also include new video interviews with Yamamoto, Satoh, and art director Kuni Fakai. The only other extras on the disc are the vintage trailers, though the release also comes with a 16-page booklet with photography and a new essay by filmmaker and film fan Dennis Bartok.