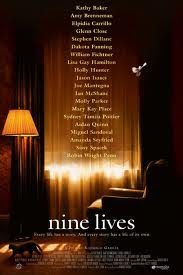 It has never been considered uncommon to go to the theater to watch a series of scenes performed onstage, so it seems that this should easily transfer onscreen as well, yet it is hardly attempted. Nine Lives, an intriguing film which made its mark at the Sundance Film Festival this past year, is very theatrical in the sense that it is composed of nine scenes from the lives of nine very different women. What adds to the theatrical feel of the film is the fact that each scene is done in an unbroken take, making a film out of nine shots which are unedited.

Nine Lives Begins with Sandra, a prison convict who is visited by her daughter. Diana (Robin Wright Penn) is shopping in the second segment when she runs into an old flame. This is the most poignant and honest of all the segments, which is unfortunate because it is over quickly and there are seven more scenes to follow. Next is Holly, who has come home to tell her step-father how he has hurt her. This is definitely the most melodramatic of the series, never really allowing the audience to know what is going on. Sonia, played by Holly Hunter, is going to visit friends with her boyfriend when he decides to share intimate details of their relationship. Samantha is a young woman trapped between her two parents who don’t talk to each other directly. Lorna (Amy Brenneman) is attending her ex-husband’s wife’s funeral with her parents, despite the fact that most don’t feel it is appropriate for her to attend. Ruth (Sissy Spacek) is flirting with the idea of adultery in a cheap hotel. Camille struggles with her fears by snapping at her husband and the nurse in a hospital before a surgery. Maggie (Glenn Close) has a picnic with her daughter (Dakota Fanning) at the grave of a loved one.

Not all of these nine women are likable, but they all have a common theme to one another. Each of them is significantly tied to another person because of a relationship, and within these short segments we are allowed a glimpse of this. It is profoundly touching for all of its simplicity. Although some of the characters are intertwined within each story, this is not what makes this film so beautifully done. What makes it truly good is not even the technical achievement of creating a film with only nine shots. What makes this film startling is the simple honest truth of the emotional moments that these women experience in the short time we are with them.

With a simple and poignant score to backdrop the lives of these women, Nine Lives flows wonderfully from one moment to the next. Although I can’t say that I liked all of the characters, or agreed with their actions, after their segment was over, I felt that I had experienced them if only for a short while. This is the true markings of a great script, and a great director. A mark was made on me, but more importantly, I was put into the shoes of nine people very different from myself.