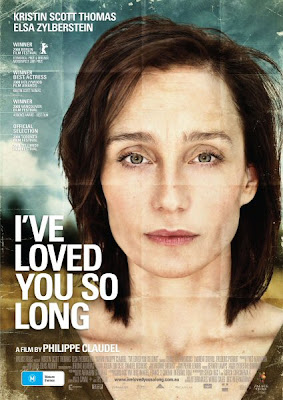 Watching an actor speak in a language a language different from what the audience is accustomed to, is somewhat like watching an actor reinvent themselves. Any variety of costumes, make-up and accents can do little to disguise the actor we are familiar with, but actors who can move fluently between languages has the ability to shift cultures entirely. Make-up is noticeable, especially when done on an actor or actress whose face is familiar by all, but the ability to speak languages requires more than a skilled artist. Kristin Scott Thomas is so remarkably capable in the French I’ve Loved You So Long, it is hard to believe she is best known for an English-speaking role in The English Patient. It is also remarkable that she was not honored by at the Oscars, though it may come as no surprise that Penelope Cruz was given the Best Supporting Actress Oscar for the bilingual character in Woody Allen’s Vicky Christina Barcelona.

Kristin Scott Thomas is Juliette Fontaine, a middle-aged woman just released from prison after a fifteen year sentence. She is picked up from prison by her younger sister, Léa (Elsa Zylberstein), though their relationship has been broken fro the entire time in prison. Juliette has a cold silence about her, seeming to protect herself with slight resentment and bitterness, though in moments alone it becomes apparent that the entire ordeal is simply overwhelming for the woman. Léa is having an equally difficult time, though she is determined to repair the relationship with her sister, carrying the guilt of having obeyed her parents in pretending Juliette no longer existed.

The crime which Juliette committed as a doctor fifteen years prior was not only illegal, but also carries weight with its impact. For this reason I won’t go into details, though Léa’s husband, Luc (Serge Hazanavicius), is less than pleased to have an ex-convict in the house with their adopted children. Soon Juliette develops a relationship between the girls, which comes surprisingly easily to the woman despite her past. Luc’s father, Papy Paul (Jean-Claude Arnaud) seems content simply to ignore her, despite the fact that Juliette opens up to the old man more than anyone else. In a scene that he is more determined to read, she shares more with the man unable to respond than all of the questions she has received since arriving. Her probation officer (Frederic Pierrot) seems to be on her side, though his stability is not something that Juliette can rely on. The struggle proves nearly impossible to understand completely, especially in Juliette’s silence, but this allows a sense of discovery for both audience and sister as she begins to open to Léa.

Words can’t describe the manner in which the performances of fully developed characters prevent the film from ever appearing dull or uninteresting. Even when there is little significant to say about a particular scene, the reactions on the actors faces convey a wealth of understand to the audience. The Blu-ray release of the film offers an alternate audio track with an English-speaking version dubbed with Scott Thomas providing her voice for the track. There are also a series of deleted scenes with an option commentary track with first-time director Philippe Claudel.