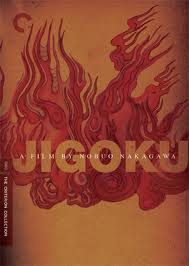 The events in the film are all set in motion when two men, one seemingly good and the other apparently evil, hit a man while driving one night. Shiro is a theology student who also happens to be romantically involved with his professor’s daughter. It is a perfect situation that is destroyed, as everything is, by the one accident of killing a man in a hit and run. The evil man convinces Shiro that he is partly responsible for deciding to take the road that the drunk man was stumbling down. When it turns out that the drunk man they killed is a yakuza whose mother saw the car, Shiro and Tamura find themselves in trouble. Shiro is punished the most because he is forced to watch the people he cares about die until he finds his way to hell. We follow the two men on their journey to hell, at which point the style of the film is in complete control and narrative structure is fiendishly confused.

Shiro is allowed to ask forgiveness with many that he meets in the afterlife, possibly giving him some final redemption, but it is important to remember that the literal translation of the title is “hell”, and that seems to be the exact journey that the film tries to take the audience on. There is no relief in which Shiro has a chance to recover ground. It is a fast and steady decline from the moment that he makes the one mistake. As he makes the journey we are brought through the different stages of hell, allowed to experience them through the strange style which director Nobuo Nakagawa commits to through the entire film. There is a lot of fire, screaming and weird men with their faces painted, but as the film continues the violence becomes more and more shocking.

The visions of hell are solid and are definitely the strongest thing about Jigoku, which is apparent when the images are shown in much more emphasis than the plot in the second half of the film. The first half does a good job at setting up the random manner in which the story will be told, but it also does very little to prepare the audience for the horrors which follow.

The DVD of this film from 1960 brings a great transfer which is newly restored and high definition digital. There are a number of other perks, but the best in the bunch is definitely Building the Inferno, a new documentary which focuses on Nakagawa during the making of the film. The documentary also features interviews with actor Yoichi Numata, screenwriter Ichiro Miyagawa and many other collaborators. There is also a theatrical trailer, galleries of poster art, and an insert essay by Asian-cinema critic Chuck Stephens.