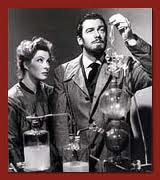 Each year around award season there are always a few biopics, which are almost certain to receive enough acclaim to achieve award nominations, if only for the performances. Apparently it was no different in 1943, because Madame Curie is a compelling biopic which earned seven Oscar nominations including Best Picture, Best Actor, and Best Actress.

I felt somewhat misled by the cover of Madame Curie, which had large photos of stars Greer Garson and Walter Pidgeon which looked similar to their Mrs. Miniver roles, with a tag-line that makes it seem as though this is a sequel. In all truth the film is about Marie Sklodowska, a Polish girl who attended the prestigious Sorbonne in and eventually made a breakthrough in science with her husband, Pierre Curie, a professor at the university. The only hint of that on the cover is a small photo of a book with a photo of the real Madame Curie.

The first half of Madame Curie is the love story, of how they met and fell in love through the shared love of science. This portion of the film isn’t so much romantic as it is humorous, although there is sweetness in the absurdly extreme intellectuality of the couple. Even as he proposes to her he is using equations as metaphors for why they would make a compatible match together and they take scientific books to read on their honeymoon together.

After this arrangement is made we truly see how perfect they are for each other. They find casual discussion of complex science to be invigorating and will abandon all else to work in the lab together. Watching them problem solve together is a fascinating second half of Madame Curie. The problem solving leads them to the discovery of radium, a new element at the beginning of which led them to 1903 Nobel Prize.

Such a nice post!! I am very impressed with your content. Thanks for sharing. Also I like to play Null's Brawl Mod which is more fun than any other game.

that's a nice old movie. the story in it, i liked it so much. thanks for sharing such nice post. i look forward to more posts like this one.

Your post is helping me a lot. Its really nice and epic. Thanks a lot for the useful info on this topic. You did it so much well. I love to see more about. Keep sharing and updating. Also share more posts with us. Thank you.