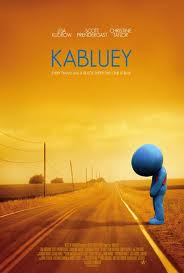 Sometimes there is a danger when a writer/director also chooses to star in his own film, and it is an understandable one. When you are in charge of both the material and how it is presented, there is an urge for the actor in the writer/director to make himself look good. The urge for vanity never seems to occur to Scott Pendergast in Kabluey, a film about depressingly low and demeaning things we will do for family. Although Pendergast seems to be the only actor playing a likeable character in the movie, his script puts him in more demeaning and embarrassing situations than anyone would normally put themselves in when vanity is an issue.

Lisa Kudrow has a bad habit of getting cast as either extremely dumb women or unbelievably bitchy women, and Kabluey definitely throws her into the latter category. She stars as Leslie, a struggling army wife who is less tough and rough around the edges than she is unreasonably demanding while her own actions are laced with all kinds of hypocrisy. Her bitterness is understandable considering her two unruly children, bills that continue to pile up, and the recent deployment of her husband to Iraq, but the fury in which she unleashes it upon her brother-in-law makes her extremely difficult to like.

Salman (Scott Pendergast) is a unique and slightly strange unemployed thirty-two-year-old man with nothing better to do than help his sister-in-law, but he hasn’t seen his brother or Leslie since their wedding. Salman is very different than his muscular and menacing brother, and immediately receives resentment from Leslie and the two children because of this. They terrorize him, treat him like an idiot for things he wasn’t told, and one of the children even threatens to kill him, but Salman patiently continues to try and help the ungrateful family in their time of need. When it seems like things aren’t going to work Leslie asks him to leave, but without the money for a bus ticket he is stuck with them.

In order to help Salman, Leslie gets him a job at her work, so long as he helps pay for day care for the children out of his paycheck. Salman goes along with it, not realizing that the job requires him to be the mascot for a dying internet company, parading around in a sweltering blue costume. Between handing out flyers for office space in the middle of nowhere and taking care of demonically uncontrollable children, Salman is forced to grow accustomed to an unappreciated lifestyle of hard work that is new for him.