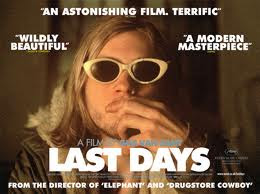 Like Gus Van Sant’s last two films, Gerry and Elephant, Last Days is both ripped from the headlines as well as untraditional in the use of storytelling. To say that Last Days is similar to the previous films would be an understatement as well as a slightly undeserved compliment. While Last Days certainly makes use of the same techniques visually and through music and often evokes the same feeling as well, the technical aspects have taken a slight dive in quality from the other films. Although this is apparent for most of the film, especially for fans of the past two, there are moments of greatness in which one cannot help but be mesmerized.

Mirrored after the last days of Kurt Cobain, Michael Pitt plays a fictional musician, Blake, who has escaped into a large house in the woods, hiding from the world. The film begins with a journey Blake takes into the wilderness to bathe in a creek. The next morning he returns to his home, slinking from room to room, occasionally with a purpose, all the time avoiding the friends living in his home. The only time he is approached by his friends is when they want something from him, and even then the conversations are remarkably one-sided. Blake opens up and speaks more with a man from the Yellow Pages sales department than he does with those close to him.


Many of Blake’s actions are so far gone that one can only assume there are drugs involved, even though he is never seen taking them in the film. Blake changes his clothes with ferocity, at one point even wearing a dress as he carries a gun around the house. Blake’s friends also act with the same sedation as they move about the house, at one point having an extended conversation with two brothers from The Church of Jesus Christ of the Latter Day Saints.

Although there are moments of dialogue most of it does not include Blake. Blake is the focus of the film and yet he always remains quite distant from the audience. He is often speaking to himself but we are not privy to most of what he is saying, and there are very few moments when we even see his eyes. He spends a great deal of the film on camera, but either his back is to us or his long hair is hanging over his face, shadowing him. In this sense we are able to experience what Cobain may have gone through during his last days, but we are never allowed to understand it. The few moments that Blake seems to be exposed are when he has an instrument in his hand. Pitt wrote and performed the songs and they provide crucial moments in the film.

While the structure of the film is as good as the last two films, I cannot help but compare the technical quality. Gerry and Elephant possessed such strong visual qualities to them, it was near impossible for me to take my eyes away. Although Last Days has a certain beauty to it, and there are a number of impressive shots, there is a definite decrease in the quality of the cinematography. With a film so reliant upon the visuals because of the lack of dialogue, it is somewhat upsetting that the quality did not match its predecessors. I also found the audio mixing to be somewhat difficult to bear at times, with sporadic water sounds and church bells ringing for some unapparent reason. When there is music, the film soars, but at moments without it I felt attacked by the constant use of loud background sound. Perhaps it served its purpose, but to me it just seemed distracting.

I would like to see Van Sant try this style some more, assuming he can get his hands on another subject as compelling. I really enjoyed Gerry and Elephant, and Last Days nearly grabbed me as well. They are difficult films to watch and they go completely against the pace which we have been forced to adjust to with the MTV age. I find the slow pace a nice change, although I don’t expect it to catch on in multiplexes any time soon.