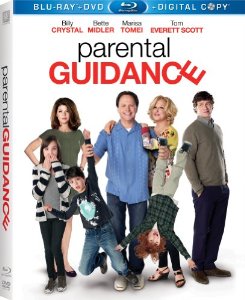 Disc Features: 8/10
From bad bathroom humor to predictable storylines, this could have been a perfect film for younger audiences. Add a few actors who will only be appreciated by the parents and suddenly the focus shifts. Parental Guidance suffers from too much meddling. What may have originally been a clever premise (albeit one more likely to consume twenty minutes of air time in any number of family sitcoms) becomes a muddled mess of forced jokes that never land.
Billy Crystal and Bette Midler head up the cast as the shunned grandparents, Artie and Diane. When there are no other options, their over-protective daughter (Marisa Tomei) is forced to ask her parents to watch her kids when she goes out of town with her husband (Tom Everett Scott). Artie and Diane are the unpopular grandparents, evidence shown by the lack of their presence on the family mantle full of photos. Seeing the babysitting as their opportunity to get back into the good graces of their daughter, Artie and Diane struggle to make a connection with the kids.
Each of the three children are unique in their own way, mostly because of the coddling nature of their parents. Artie and Diane have a more direct approach to parenting, though they are forced to adjust their methods in order to help. In the end, they both bend some and there is an inevitable family reunion. The children are positively affected and the grandparents win the love of their family again. All of this is fine and well on paper, but on film it is unlikely to entertain adults or children. The veteran actors over-act a bit too much for sake of the family humor, but this is not enough to make it move at the pace younger audience members have become accustomed to.
The Blu-ray comes with an additional DVD and digital copy of the film. The special features on the Blu-ray are highlighted by a commentary track with director Andy Fickman and Billy Crystal. There are also deleted scenes with an optional commentary by Fickman, and a gag reel. The last of the special features is a promotional featurette with interviews from the stars about their roles.