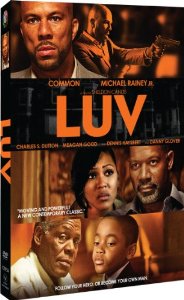 Luv is not exactly the film that I was expecting to see. Instead of being a Pursuit of Happyness type of film, instead it ends up playing like an urban Road to Perdition. It is a dark film in which an innocent young boy is forced to grow up in ways that seem detrimental and unhealthy. This movie is perhaps the most difficult to watch when considering what the future holds for our young protagonist after being exposed to a day of ill-guided role modeling.

Woody (Michael Rainey Jr.) longs for his mother to return home from an unexplained absence. In the meantime, he lives with his grandmother (Lonette McKee) and his recently paroled Uncle Vincent (Common). On one particular morning when Vincent is dropping Woody off a school, he suddenly decides to take the boy along with him for the day. At first this seems ordinary and a way for Woody to be provided with a male role model. Throughout the day he will learn how to crack a crab on his own, he will sip his first beer, and many other supposed rites of passage.

The film gets complicated due to the fact that these are rites of passage being provided by an ex-convict. Along with the healthier lessons come some which seem inappropriate for a boy of any age, such as the lesson for hiding drugs or a gun where they aren’t likely to be found when searched. It is difficult to be completely certain if Vincent’s motives are honorable or selfish, because Woody seems to play a direct role in some of the dangerous plans laid out before them through the day. At the same time, Vincent seems to be teaching Woody things that he sees as important, however misguided these lessons often are.

The DVD includes the making-of featurette, as well as deleted scenes and a commentary track with filmmaker Sheldon Candis. There is also an additional brief featurette with Common and Michael Rainey Jr. talking about the film.