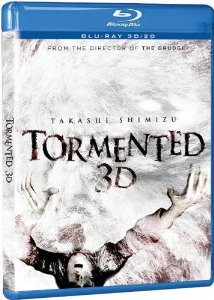 
Disc Features: 2/10
Japanese director Takashi Shimizu is best known for Ju-On, and the subsequent remake, The Grudge. still makes horror films, and they often still involve ghosts. Recently, however, the utilization of 3D seems to have softened the filmmaker to a place of strange cinema. Previously releasing Shock Labyrinth 3D, an atrociously bad film about a group of friends in a haunted hospital, has returned with a tamer and equally inexplicable horror film in 3D.
Tormented is not exactly a sequel to Shock Labyrinth, but it has many similarities. The largest and hardest to ignore is the fact that the director’s last 3D film is featured within Tormented. In this sequence we are forced to watch a 3D scene of people watching a 3D movie, emphasizing the rabbit from ’s previous film. This rabbit is the most important connection, because Daigo is terrorized by a comically large stuffed bunny rabbit. Daigo is a young boy who puts a dying rabbit out of its misery in the opening sequence, alongside his sister Kiriko.
Kiriko wants to protect Daigo, but this becomes more difficult as he begins to sleepwalk and see the rabbit everywhere. This may be frightening for Daigo, but as an audience member it was just strange. This seems to be a horror film which was meant to be for the whole family, a novelty to show off the 3D effects more than anything else. In 2D it is nearly too nonsensical and dull to endure, though the technical aspects are technical adequate.