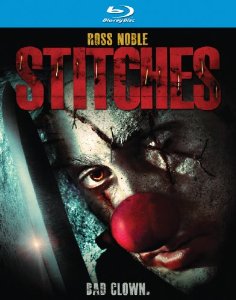 
Disc Features: 7/10
There is enough off-beat humor and grotesquely creative deaths in Stitches to satisfy the entertainment quota for most horror fans, though it may go overboard at times. This kind of over-the-top vulgarity is reminiscent of early Peter Jackson films, which is fine for cult status but unacceptable to the mass audiences. From a dream sequence with extreme genital mutilation to the slaughtering of a household pet for a joke, Stitches goes beyond bad taste in order to shock a specific desensitized audience group. This is advanced horror, not for the casual blockbuster horror audience members.
Comedian Ross Noble makes his cinematic debut as Stitches the Clown, a poor excuse for a party clown who meets a gruesome end when a group of children pull a prank during his act. The bloody accident occurs at young Tommy’s birthday party, so that parties are no longer an annual event, even when he is a grown teenager years later (played by “Doctor Who” actor Tommy Knight). When Tommy finally breaks down and decides to throw a massive party the year his parents go out of town, Stitches takes the opportunity to come back and seek revenge. 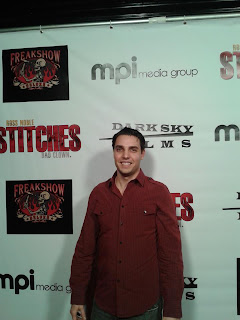 I was able to attend the premiere of this horror film this past week, at which director Conor McMahon expressed his desire to make a film like the horror films of the 1980s. In many ways, he was successful in this endeavor. The creative kills done with humor and practical effects over the computer generated ones match up with the mood of many horror franchises of the 1980s, with Freddy Kreuger being the first to come to mind. Add that to the extreme gore of ’s 1980s horror comedies like Bad Taste and Stitches fits right in. This does not make for cutting edge horror, but rather a sense of nostalgia entertainment for those who have a deep love of the sub-depths of the genre.

The Blu-ray release of this engaging little horror film includes an audio commentary with director McMahon and star Noble. There is also a making-of featurette, trailer and a blooper reel.