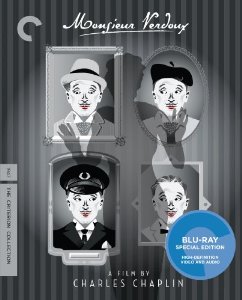 Disc Features: 10/10
I have always loved cinema. As a young child I was exposed to the usual joys of visiting the local theater, and growing up in the 1980s meant the additional pleasure of video rentals. We would see how many times we could watch the film before having to return it. This was all your run-of-the-mill appreciation, however, and it wasn’t until I was around 10 that this developed into a life-long love affair. The moment I realized that I was different than most kids came when I was the only one my age able to answer a trivia question about a silent film character known as “The Tramp.” Charles Chaplin opened my eyes and imagination to a world which was timeless, and that love has never waned. Monsieur Verdoux, however, was one of the few Chaplin films which I had difficulty with as a child.
This is no longer “The Tramp,” as the world had changed in such a way that made him somewhat irrelevant. As it was, Chaplin was able to keep the beloved film character around and remaining silent long after the “talkies” had taken over. The Tramp was a character that gave hope and joy to Americans in times of difficulty. He allowed the masses a distraction from their own misery, while also seeing the ability that the downtrodden screen persona had with making the same troubles humorous. But as World War II came, Chaplin was forced to shift the focus. First there was The Great Dictator, and Monsieur Verdoux is a post-war film with understandable themes of survival that carry more cynicism than Chaplin’s pre-war films, much like the arrival of the film noir.
As well as playing a speaking role, Chaplin deters from the usual path with his role as the title character, which was based on the case of an infamous real-life criminal. Orson Welles originally approached Chaplin with the idea, but since the silent screen star always directed his own films, he bought the idea instead. The result is a thoughtful comparison piece to the persona Chaplin had built up onscreen to this point. Famed critic André Bazin has an essay included in the booklet insert which goes into detail examining the polar differences in this role. The booklet also includes an essay by critic Ignatiy Vishnevetsky and a reprinted piece by Chaplin, mostly in regards to the accusations of his communist involvement. This is also thought to be the main reason behind Monsieur Verdoux’s minimal success upon original release.
The Blu-ray release has a 2K digital restoration of the film, with uncompressed monaural soundtrack. The special features include a 2003 documentary on the film’s production and release, as well as an all new documentary, “Charlie Chaplin and the American Press.” Also included is an audio interview with actor Marilyn Nash and a marketing gallery of advertisements and trailers.