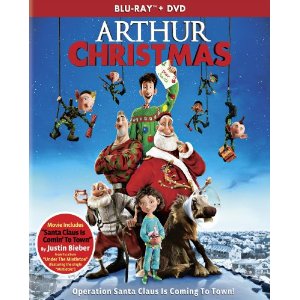 Christmas films are the one category of movies which usually take a year to find their way to home video. Nobody wants to buy a Christmas film in March, so they usually just wait an entire year to release it. Last Christmas Arthur Christmas was in theaters, but this year it will make the perfect holiday gift for children and families alike. Arthur Christmas isn’t an instant holiday classic, but I would have no problem adding it to the list of annual holiday movies. It is fun-filled and creative, bringing entertainment to every age group in the family.

The creativity in the story comes from a practical explanation for the miraculous existence of Santa Claus. No longer does Santa travel by sled or go down the chimneys himself. The answer for so many toys delivered is a state-of-the-art spaceship sled and an army of trained elves to deliver the gifts quickly and efficiently in each city. This newer system seems to be working wonderfully for the latest Santa and his crack team that includes an innovative son to ruin the spaceship and another who simply embodies the spirit of Christmas.

Arthur is not the most efficient worker in the North Pole, but he is tolerated because of the fact that he is the son of Santa. Nobody seems to think Arthur is worth much, but he has a chance to change all of that when the high-tech present delivery system fails to visit one child. With a missed child, Arthur sets out to deliver the last present on his own, using the old fashioned method of a sled and reindeer. In the process, Arthur is able to teach his family what Christmas is really about, rather than the efficiency that they have been focusing on.

The Blu-ray combo pack comes with a DVD and Ultraviolet copy of the film. The special features include a number of making-of featurettes, including a progression reel to see how the animation advanced from step to step. There are also plenty of features for the younger fans, including one which goes into greater detail about the Claus family in the film. There is also an elf recruitment video.