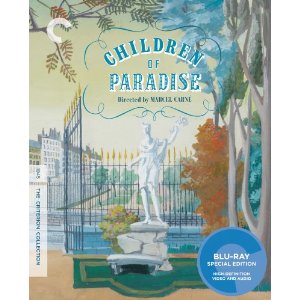 Children of Paradise is widely considered one of the greatest French films ever made, a masterpiece of technical achievement blended with an emotional connection to unforgettable characters. At 190 minutes, Children of Paradise can afford to allow depth and layers in the construction of the characters, which adds weight to the love triangle at the center of the tale. It is an homage to an antiquated form of entertainment, a lovingly portrait that is paired with a breathtaking beauty who must choose between the old way of entertaining and the new one.

Although Marcel Carné’s masterpiece has a love triangle which compliments the already existent themes of the changing entertainment world of nineteenth-century , there are many other threads to the tapestry of this world. Our main female protagonist, Garance (Arletty), is admired by all. Throughout the film she has as many as four different men pursuing her, using whatever means they have to obtain her beauty, though there is only one man that truly has her heart.

The men within the film all seem to be symbols for the changing times, and it is no coincidence that though Garance’s heart belongs to a man representing an antiquated form of entertainment. Baptiste Deburau (Jean-Louis Barrault) is a mime who makes a sudden rise to fame in the 1820s theater scene. Children of Paradise deals with ever aspect of theatrical entertainment in , from high to low. At the same time that Baptiste is making his rise with the emotions of mime, an actor named Frédérick Lemaitre (Pierre Brasseur) makes his own way up to the top. Though each are in a different medium of theater and not exactly in competition, they are constantly in competition for the heart of Garance. Their love triangle is a civil one, unlike many of the other suitors that come into Garance’s life.

The quality of the story and its underlying symbolism is astounding, which increases infinitely when the details behind the construction of the film are learned. Made in Nazi-occupied during the end of World War II, there were many pitfalls and difficulties. Carné previously had success working under these conditions when he created Les Visiteurs du Soir.

The Blu-ray release of Children of Paradise includes a fantastic second disc filled with special features about the film’s production and every aspect of admiration since then. There is a video introduction by Terry Gilliam, a 2009 documentary about the making of the film, a new visual essay and a 1967 documentary about the film. This is all on top of the fact that this is the 2011 restoration, which is the best possible presentation of this masterpiece, and in high definition. The first disc, with the film, also comes with optional audio commentaries by film scholars Brian Stonehill and Charles Affron. The package also comes with a 40-page booklet with an essay by film scholar Dudley Andrew and an excerpt from an interview with Carné.