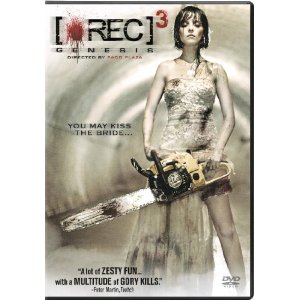 This Spanish horror franchise began with a frightening and creative first film, one which inspired a remake, Quarantine. Both films utilized the ever-popular found-footage style of horror which began with The Blair Witch Project over a decade ago, but purists would argue for the quality of the original franchise. The franchise has shifted focus in this third outing, pulling away from found footage to a more polished approach, which actually looks more like a film. The main difference is in the brutality of the horror violence, which increases three times as much in this third film in the franchise.

Rec 3: Genesis may veer away from the found-footage that has previously defined the franchise, but it keeps the even more important element of quarantine. The monster in these films is a contagion, and one which turns people into demonic zombie-like creatures with the ability to spread the disease by bite. The film begins as found-footage through the use of wedding videos. Clara and Koldo are about to share their special day with family and friends when an outbreak of a virus causes mass panic at their reception. Soon the entire party is quarantined and those remaining must struggle to survive.

There are two opposing elements which set Rec 3 aside, though somehow they manage to compliment each other. One is the romantic subplot between Clara and Koldo, who spend much of the film trying to find each other amidst the carnage, and the other is the graphic nature in which that carnage is displayed on camera. There is more romance in this film, but it is also more graphically violent and disgustingly gory than the other films in the franchise. These opposing elements work together, but this has been utilized before in similar films, whether The Signal or 28 Days Later.

The DVD release includes a select number of deleted scenes, as well as some outtakes.