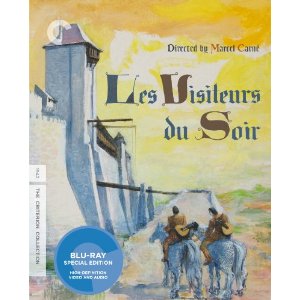 Before Marcel Carné went on to make Children of Paradise, a masterpiece in French cinema and an epic tale of the nuances in early 1800 romance and theater, he made a fantasy film which is every bit as impressive. Though the scale in Les Visiteurs du Soir is much smaller, the impact is just as impressive. Even more remarkable is the fact that this film was completed at all considering the limitations of the times

Made in Nazi-occupied during World War II, there are often interpretations of this film which compare the tyranny of the devil within the storyline to that of Adolph Hitler and his troops. Even without this symbolism there is a wonderful fantasy film in Les Visiteurs du Soir, and the difficulties in making a film during a time of harsh occupation is impressive enough. The technical aspects are a bit more minimalist than Carné’s Children of Paradise, but this is mostly due to the harsh conditions put to the filmmakers. Even with sets that look a bit simpler, this medieval fantasy has enough heart and soul to outlast any spectacle onscreen in times of peace.

The film begins with the arrival of two strangers dressed as minstrels (Arletty and Alain Cuny) at a castle during court festivities. They pose as siblings and musicians, though their true relationship seems romantic and even more disturbing is their mystical origins. They are emissaries of the devil, dispatched to spread heartbreak in the kingdom by seducing and splitting a royal couple. The mission is only endangered when love begins to encroach on their mentality, giving them the strength of free will from the devil’s will.

The Blu-ray release of this classic includes a new digital restoration with an uncompressed monaural soundtrack and improved English subtitles. Also included is a 2009 documentary about the making of the film, a trailer and a booklet with an essay by film critic Michael Atkinson.