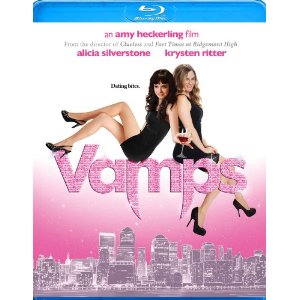 Vampire films have moved beyond any level of seriousness and what we have remaining is Clueless with fangs, however dull they may be. Amy Heckerling and Alicia Silverstone reunite with this girl-power vampire comedy, attempting the same levity of their previous success without the strength of a structure taken from literary legend Jane Austen. There are moments of successful humor in the storyline that attempts to blend “Sex in the City” with Twilight, but more often than not it feels like a film best suited for thirteen-year-old girls.

The mythology of vampires is about the same as you would expect from traditional horror movies. There is no diamond glistening skin, but a more traditional combustible reaction to the sun. But the gruesome aspects of Vamps are played down in favor of more romantic aspects of story. Goody (Alicia Silverstone) and Stacy (Krysten Ritter) each have different problems, though each romantic relationship is complicated by their condition. Goody runs into a lover (Richard Lewis) she had years earlier and must explain the fact that she has not aged in over a decade. Stacy falls for the son of Van Helsing, a legendary family of vampire hunters.

There is an impressive cast here, including Sigourney Weaver as something of a villainous character and Malcolm McDowell in an underused capacity. Unfortunately, none of the star power is enough to provide focus for this vampire rom-com. The Blu-ray doesn’t do a great deal to enhance the film, which looks to have been quickly shot on a budget. There are also no special features to speak of.