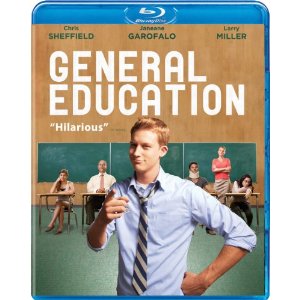 General Education attempts slick comedic entertainment, though there is nothing particularly comical about the scenario of the film, and the actors all play the story so straight that the laughs are more than occasionally forgotten. While originally I had figured this film to be a rip-off of Billy Madison, about a man forced to return to summer school. It turns out, this is just a film about a slacker high school student who fails a class and is forced to secretly take summer school in order to hide this secret from his parents. This scenario is so boringly ordinary that I feel as though it would have been more entertaining to have had a friend in high school go through this than watch some poorly made up character in a painfully dull situation.

Levi Collins (Chris Sheffield) is a decent tennis player, although none of the footage in this film would convince you of that. The only problem is that his school doesn’t have a tennis team and his father is overbearing about his need to play tennis in college, so school is often missed for tennis matches at a private club his family belongs to. His father insists that he miss school for tennis, but apparently he doesn’t take any of the responsibility for the negative outcome this has on Levi’s schooling, so failure because of these games is still hidden.

The logic of this film makes no sense, but even more offensive than that is this comedy’s inability to manufacture humor in any possible way. The characters aren’t particularly humorous and neither is the situation, making this film somewhat dead in the water. Even the addition of comedy legends such as Janeane Garofalo is a waste, because she plays the mother without any humor added to her character. The Blu-ray release of this film is just as unimpressive. There is an audio commentary with the director, producers and the sound editor of all people. There are also outtakes, which are slightly more enjoyable, and a generic making-of featurette.