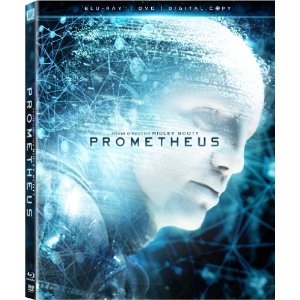 I would rather watch an interesting failure than a predictable film which is decently made. Prometheus swings for the fences, and yet it fails to come together as a complete film. What we have here are aspects of spectacular filmmaking that are muddled together within a shaky script and a director who has seemingly lost some of the fire from the filmmaking of his youth. At the very least, I can honestly say that I enjoyed Prometheus far more than Ridley Scott’s last film, Robin Hood. Compared to Robin Hood, Prometheus is a near masterpiece while still remaining light-years away from the quality of a film like Alien.

Though Ridley Scott refused to refer to this film as an Alien prequel, there are clear lines in similarity. There is a great deal more happening within this screenplay, but there are many of the franchise’s familiar elements, from body invading alien life forms to cybernetic human beings aboard a spaceship. That being said, the aliens come in a different form than we are accustomed to, mostly because this is a film about the origins of the alien life as well as humanity. There is a certain level of absurdity within this storyline, but at the very least it is original.

There seem to be several different films in this one movie, and aspects of each are compelling. Discussions of the origins of life dominate the dialogue along with discussions of souls and what it means to be human. Occasionally this is weighs down what would otherwise be a rather straightforward alien monster movie, though the different types of action and horror make each sequence different from the last. These scenes are mostly paired with astounding visual effects and some great suspense, though they are also plagued with nonsensical logic and very little consistency. Overall I would say that Prometheus is not a great film, while individual sequences are worth admiring.

The Blu-ray release includes a DVD and digital copy of the film, along with a second screen application for the Blu-ray disc. The special features include a number of deleted scenes, which include a number of deleted scenes and an alternate opening and close of the film. The highlight, however, are the two commentary tracks, especially the one with director Ridley Scott. The second commentary is with the film’s writers.

Why is the guy who's job it is to map the caves, replete with little floating balls that he invented to map caves, and after giving a speech about how he loves rocks and is his sole reason for being on this mission, why does that guy get lost in the cave?