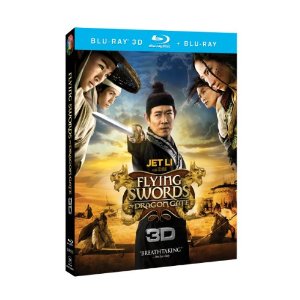 I honestly couldn’t tell you what was happening throughout a majority of the two hour running time of Flying Swords of Dragon Gate, but I could tell that the 3D special effects were the primary focus in both action choreography and even the approach taken to telling the story. Perhaps this is why it seemed so muddled, and occasionally even comical. Watching this film in 2D is almost a waste of time, which speaks volumes to the importance put on the visual spectacle of 3D.

Jet Li is one of many to head up this ensemble cast of actors, though a majority of the action seems to use computer generated images of the actors rather than the actors themselves, creating a comical sense of disbelief within the action, despite the impressiveness of the 3D. Li is a vigilante named general Zhao who has become determined to restore order to the throne by hunting down corrupt officials.

A majority of the action takes place in a remote inn, where Zhao travels to hunt down a corrupt eunuch named Yu. Also hiding at the Dragon Inn is a palace concubine who is pregnant and a swordsman, and all of these groups must face each other when a sandstorm keeps them all within the inn.

Disc one of this 2-disc Blu-ray combo pack includes the high definition presentation of the feature film in 2D, whereas the second disc has a Blu-ray 3D disc. The special features include a making-of featurette, as well as behind-the-scenes footage and interviews with cast and crew.