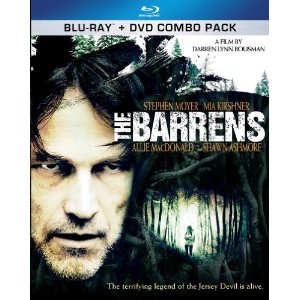 The sanity of the father figure has come into question a great deal recently in horror, which leads me to question the reasoning. Father figures in horror movies have taken a hit, though their insecurities about an inability to protect their family from menacing outside forces is usually overcome with a climax that has them stand up and fight against these villains. This alludes to a mass social insecurity on the part of the male figures in , and their fear of an inability to care for their family. Horror is therapeutic, allowing us to face and overcome our fears within the confines of a predetermined dramatic structure. The fathers must seem inept, if only to overcome this obstacle and prove themselves a worthy protector and provider for their family.

The Barrens is about a father who is desperate to protect his family from a creature deep in the woods of southern . Richard Vineyard (Stephen Moyer of TVs “True Blood”) is vacationing with his family while also spreading the ashes of his father, but the camping trip turns into a nightmare when Richard becomes convinced that the mythical creature known as the Jersey Devil exists and is hunting them from with the wilderness.

From this point in the story on there are some cliché devices which can weigh down the plot, including the tiresome point in which nobody believes what Richard says he has seen in the woods. The only saving grace for this film is the fact that the question of Richard’s sanity is not answered for the audience either, allowing us to wait to find out whether the creature is real or simply a figment of a delusional man’s imagination.

The Blu-ray includes an audio commentary from writer/director Darren Lynn Bousman, perhaps best known for his contributions to the Saw franchise, along with his director of photography, Joseph White. There is also a deleted scene.