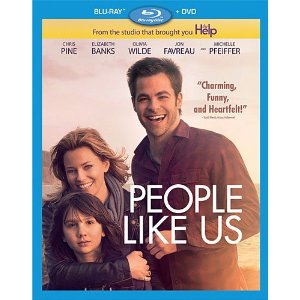 People Like Us is a family drama, though one which is far from traditional considering the secrecy of the family ties. Inspired by true events, this tale has been warped to fit into the melodrama and predictable character arcs of studio films. There are some truly engaging moments thanks to the talented cast and a capable director, though there are more than a few cliché moments with the story. It is as though real life has been filtered through the movie world, where everything is safely predictable with a happy outcome.

Chris Pine stars as a Sam, a fast-talking salesman with a past that he would rather forget and a predictably supportive girlfriend (Olivia Wilde) by his side encouraging him to deal with the very issues he would rather suppress. When Sam gets the news that his father has dies, he is forced to deal with everything he thought he had left behind, including a resentful mother (Michelle Pfeiffer). What Sam also discovers after his father’s death is a secret second life, one which left him with a half sister (Elizabeth Banks) he never knew about.

Where the story gets a little tiresome is in the choice that Sam makes to keep his relation a secret from his newfound sister, allowing for a misunderstanding about sexual intentions to occur. Even more tiresome is the predictable reaction of anger at a secret being withheld, which is only slightly less predictable than the inevitable moment of forgiveness. There are some great performances here, but the movie itself is easily forgettable melodrama.

The Blu-ray combo pack also includes a DVD of the film. The DVD has an audio commentary with director Alex Kurtzman and actors Pine and Banks. There is also select scene commentary with the director and Pfeiffer. These are included on the Blu-ray as well, on top of a number of exclusive features. There is a featurette about the real story that inspired the film, along with a featurette about a taco stand used in one of the scenes, deleted scenes and bloopers, and an additional commentary track with the director and writer Jody Lambert.