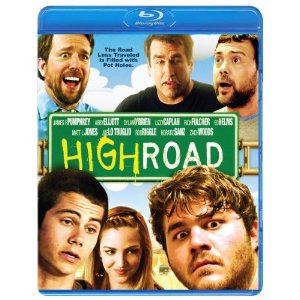 Here comes yet another comedy with marijuana influencing the story and the sense of humor, though this one fits in the category of comedies which utilize weed as a pun in the title in such a way that implies far more drug use than actually exists. That’s right; a road-trip buddy comedy called High Road has a road trip in which absolutely no drugs are smoked. This deception alone will upset the target audience for a film such as this and it doesn’t even matter if the gimmick of a fully improvised feature film is successful or not.
The film follows an underachiever named Glenn Fitzgerald (James F. Pumphrey), whose sole ambitions in life seem to be getting high and playing in his unsuccessful band. When they other band members (Zach Woods, Matt L. Jones, Lizzy Caplan) depart to pursue other goals, he is left with his attractive girlfriend, Monica (Abby Elliot), and morning bonding sessions with a 16-year old neighborhood kid named Jimmy (Dylan O’Brien). Glenn has no job and only sells weed for income. This fact somehow goes unnoticed by Monica until he becomes paranoid that the cops will arrest him after a large drug sale and flees town, taking Jimmy with him.
Co-founder of the world-renowned comedy troupe Upright Citizens Brigade, Matt Walsh directs the free-flowing comedy of High Road. The result is low budget and low laughs. There are a few humorous lines and moments within the imagined screenplay, though they are often too spread out within the scene and film to help with the chaotic rhythms in the comedy. Part of the problem with the chaos seems to stem from the improvisation. With everyone trying to improvise the most humorous lines and a cast full of recognizable faces, there is a neediness in most of the performances which is difficult to watch.
The Blu-ray includes interviews with the cast and crew.