My Week With Marilyn Blu-ray review 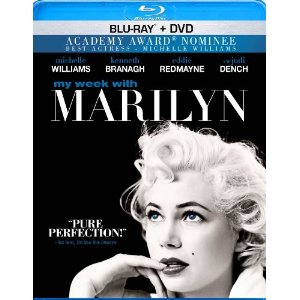 This is another year-end performance piece, and it is Academy Award-nominee Michelle Williams who is in the must-watch role as a young Marilyn Monroe during her first trip to . Anytime a historical person is embodied in a role by a movie star, it seems to be a clear choice for people to judge and often praise. These are the roles which seem to end up on the Best Actor and Best Actress lists, from Margaret Thatcher to J. Edgar Hoover. Williams garnered her third nomination from this true-life portrayal. Kenneth Branagh also received an Academy Award nomination in the supporting role as Sir Laurence Olivier.
is riddled with rumors of the real person behind the celebrity, from TMZ to the countless paparazzi rags littering the newsstands. This has always been the case, if only a change in medium has occurred. During the filming of The Prince and the Showgirl, Colin Clark wrote a memoir about his experience working close to Marilyn Monroe, who was quickly becoming the biggest female movie star alive. saw a different side of her and it became a sensational book, which has now been adapted into a fascinating film.
It seems to be the year for nostalgia, films about filmmaking. From Best Picture winner The Artist to Martin Scorsese’s Hugo, this was the focus of most acclaimed films of 2011. My Week with Marilyn focuses on the difficulties on set of The Prince and the Showgirl, many having to do with Olivier’s impatience with ’s insecurities and process of working. She arrives in with her husband at the time, Arthur Miller, though this marriage dissolves quickly enough for Marilyn to begin a flirtatious relationship with 23-year-old Third Assistant Director Clark (Eddie Redmayne). This is discouraged by everyone involved in the production, to no avail.
The Blu-ray combo pack comes with a DVD copy, both with a feature commentary track by director Simon Curtis and a featurette about .