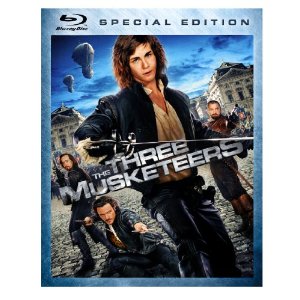 It was only in the 1990s that Alexander Dumas’ swashbuckling heroes were last brought to screen, and many times in the decades before that as well. The difference this time is the integration of 3D into the action, making for a more explosive and spectacle-enhanced version of the classic. It has an element of camp to it as well, which doesn’t help as much as set it apart from the past adaptations.
Logan Lerman from Percy Jackson & the Olympians heads up the cast as the cocky young D’Artagnan, son of a Musketeer and determined to become one himself. The king is instead surrounded by the Cardinal’s guards, headed up by a particularly brutal commander (Christopher Waltz). This is the man D’Artagnan first encounters, and he ends up insulting the three remaining Musketeers in his pursuit of justice. This is how he ends up befriending Athos (Matthew Macfadyen), Porthos (Ray Stevenson) and Aramis (Luke Evans).
These four are all that stands in the way of an evil plan to bring down the king, led by the wiles of a wicked woman (Milla Jovovich) and her partner (Orlando Bloom). This is done with impressive acrobatics and the invention of a war ship which flies through the air instead of through the sea. The film ends in a climactic sequence in which two airborne war ships do battle, shooting cannons at each other. One must wonder why neither thinks to shoot up and merely hit the hot air balloon holding the whole contraption in the air.
Logic is lost in the action and spectacle of the new The Three Musketeers, and all sense of literature gives way to simple storytelling. Even with the spectacular cast of actors, the nuances are lost in the fast-paced action. It does look and sound rather spectacular on high definition Blu-ray, however. The special feature also include an audio commentary with director Paul W.S. Anderson (Resident Evil), deleted and extended scenes, cast and crew stories and a 17th century action featurette. Exclusive to the Blu-ray disc is an interactive viewing experience which allows you to investigate the production aspects.