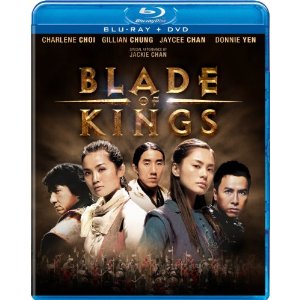 This movie was awful, just offensively bad. The only moment worth mentioning is a fight sequence between Donnie Yen and Jackie Chan, which seems to hold at least a third of the entire budget for the film. Most of the bad effects are so awfully digitally rendered that they look like special effects for television look good. It is sub-par work, in a film with an awful fantasy concept better suited for a B-film.
Taking place in an ancient land ruled by women and led by a cruel and heartless empress (Qu Ying), where men are subservient and slave-like in every regard. Her chief eunuch, Chiu Ngai (Daniel Wu), warns the empress that there is a prophecy which claims a man will rise up with the Excalibur sword and take control back for the men. All of the warlords and soldiers are sent to prevent this from happening, while the man who will make it possible is clueless still.
Charcoal Head (Jaycee Chan) and his brother Blockhead (Chen Po-lin) perform in a traveling show until they find themselves in possession of a mysterious stone treasure map. On their journey for riches, these two cross paths with two female warriors, Blue Bird (Gillian Chung) and 13th Young Master (Charlene Choi). These four are joined by Crouching Tiger, Hidden Dragon (Donnie Yen) and all make a plan to destroy the evil empress.
The effects are poor, the acting is sub-par and even the action has a great deal to be desired. The only reason for watching this film is a single fight sequence between two iconic action stars. Blade of Kings is otherwise easily dismissible. The Blu-ray special features include a making-of featurette and trailers.