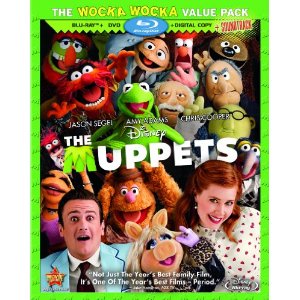 I grew up watching “The Muppet Show” and each film which followed, only tapering by the 90s when some of the storylines stretched as far as outer space. By the time the last Muppet movie was made, it seemed that the initial inspiration had been lost. Long gone were even memories of the days when The Muppets were still attached to the variety show which was “The Muppet Show.” The revival film, The Muppets, brings back the variety aspect along with many storylines which are familiar to the first films as well. In short, this is clearly a film made by someone who also grew up watching and loving these unforgettable Jim Henson puppet characters.
When Jason Segel wrote Forgetting Sarah Marshall, he specifically had Jim Henson’s company in mind for the creation of the puppets used in his musical production within the storyline. They were so impressed with this aspect of the film that Segel had an in to pitch his idea for a new Muppets movie. This is the result; a film in which Segel stars alongside Amy Adams, Chris Cooper, The Muppets and a gang of cameos. The postmodern, self-referential humor is classic Muppets, and even though Segel seems likely to match Big Bird in height, he fits right in with the beloved puppets.
Segel plays Gary, the brother of a young man named Walter who looks suspiciously like a Muppet rather than a human. When invites Walter along on an anniversary vacation with his girlfriend, Mary (), they end up on a cross-country Muppet adventure. Walter is the world’s biggest Muppet fan, so he is disappointed to find that the Muppet studios are in danger of being destroyed in a search for oil by an evil tycoon (Cooper). In order to save the studio, Walter and Gary help Kermit the Frog round up all of the old gang for one last comeback show. All of the favorites are back, including The Great Gonzo, Fozzie Bear, Miss Piggy all the way to Beaker and the chickens, it’s all here, and the Blu-ray combo pack has even more to offer older fans and younger children alike.
The 3-disc combo pack includes a Blu-ray, a DVD and a digital copy of the film. The digital copy also includes a digital full-length original soundtrack for the film. The DVD includes the film along with the one featurette, “The Longest Blooper Reel Ever Made (In Muppet History—We Think).” This is also included on the Blu-ray, as well as a number of additional features. Among them is the groundbreaking “Disney Intermission” feature, in which the Muppets take over the screen when the film is paused during playback. There is also an extended version of the Tex Richman (Cooper) rap song, explaining his hatred of Muppets. Additional footage also includes eight deleted scenes. Jason Segel also provides a fantastic audio commentary along with director James Brolin and co-writer Nicholas Stoller.