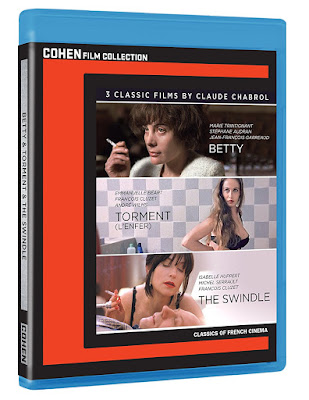 When he wasn’t attempting to imitate the murder mysteries of Alfred Hitchcock, Chabrol was often focused on the depiction of upper class lifestyles, and Betty (1992) is a perfect example of this preoccupation. The protagonist and title character, Betty (Marie Trintignant) is an amoral woman whose selfish actions are only outdone by the cold calculated reactions from the bourgeois family she has married into. We join this protagonist behaving unsympathetically, over-indulging in liquor, cigarettes, and men in various bars when a sympathetic older woman named Laure (played by Chabrol’s ex-wife, Stéphane Audran) takes Betty under her wing.

This friendship seems capable of saving Betty from herself, until a series of well-timed flashbacks expose just how deep her self-destructive nature is engrained in her past and personality. The flashbacks go back as early as Betty’s childhood, showing how an early exposure to adultery and lust may have warped her perception of love. This is not improved when Betty is later married to the son of a wealthy family (Yves Lambrecht), and is treated as a liability once her coldly selfish tendencies threaten to shame them with a scandal. Rather than risk it, the family makes the collective decision to buy Betty’s absence. Seemingly unconcerned with the loss of her husband and children, Betty takes the money and continues the destructive path of self indulgence. Although Laure initially appears to be Betty’s savior, it soon becomes clear that she is just another victim of the narcissism.

The second film in the collection, Torment (L’Enfer, 1994), continues the preoccupation with psychological issues, though it shifts to a husband whose paranoia about his wife’s infidelity threatens to destroy them both. If Betty was about a coldly selfish spouse, Torment is about a husband that fears his wife is hiding the same tendencies, essentially only having her youth and beauty as evidence. A young Emmanuelle Béart is absolutely breathtaking as Nelly, though it is François Cluzet who carries out the psychological torment of the title with his performance as the husband, Paul. Paul and Nelly run a modest country hotel together, but his paranoia over slight flirtations leads to a debilitating preoccupation that threatens to destroy both their business and marriage.

I suppose there is something of a mystery at the center of Torment, as we never know more than Paul does. It is entirely possible that some of Paul’s paranoia is grounded in reality, but his reaction is so extreme that it becomes more about the psychological turmoil that jealousy and distrust causes than anything which may or may not have actually occurred. Cluzet works hard to portray this internal conflict of a man unable to silence the obsessive distrust, whereas Béart is little more than a pristine prize for Paul to hoard from the perceived envy of other men.

The final film in the collection is the closest thing to a genre picture, including the clearest homage to the work of Hitchcock. The Swindle (1997) is a lighthearted thriller about two small-time con artists who take on their biggest score, which raises the stakes with all types of unexpected dangers. Betty (Isabelle Huppert) is the youthful partner to veteran con man Victor (Michel Serrault), who begins to question the loyalty of his cohort when she comes up with a plan to swindle a financial courier (Cluzet again) carrying a large sum of money. Filled with the paranoia of Torment and many instances of selfish betrayal seen in Betty, The Swindle is also far lighter in tone. The countless double crosses within the narrative come off as far more fun since each of the characters are self-serving thieves.

Each of the three films are given their own Blu-ray disc in this set, though only the second two have any special features beyond the basic inclusion of English subtitles. Torment comes with a feature-length audio commentary with critics Wade Major and Andy Klein, as well as a re-release trailer. The Swindle also has a commentary track with Major and Klein and a trailer, but also includes an all-new 40-minute interview with frequent Chabrol performer, Cluzet. The interview was given by Kent Jones, director of the New York Film Festival.