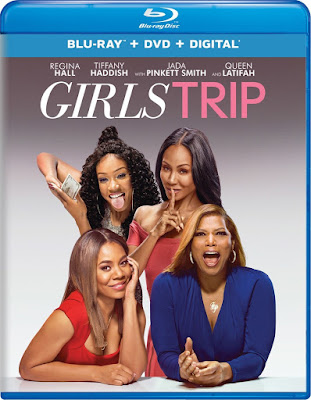 Forced into roles that are so predictable that their character arcs can be seen from the very first scene introducing each of them, Girls Trip is only saved by the life that each actress brings to the caricatured presentations. Regina Hall is once again designated the role of a serious-minded protagonist as Ryan Pierce, the narrator and queen bee of her group of female friends. Working as a relationship self-help icon alongside her former professional athlete husband (played by an under-utilized Mike Colter, best known from Netflix’s “Luke Cage”), Ryan is on the cusp of starting a brand centered on her own lifestyle. This is in danger of being threatened by her husband’s affair with an Instagram model (which is now apparently a thing, even if it isn’t an actual job), and it is up to Ryan’s longtime friends to set her straight.

Even though Ryan needs her friends’ help with her marital problems, each of them have issues of their own which must be addressed before the credits can scroll. Sasha Franklin (Queen Latifah) is a highly educated journalist, but has sold out to work for a gossip magazine and somehow is still struggling financially. Dina (Tiffany Haddish) can’t even keep a job, but her troubles are never seen as significant since she is delegated to the role of comedic relief. Single mother Lisa Cooper (Jada Pinkett Smith) is also comedic relief as the counterpart to Dina’s party girl persona, providing the laughs with her prude behavior and mom fashion sense. Even though Dina never learns to be more responsible, the film makes sure to emphasize Lisa’s need to loosen up, which is accomplished by getting her drunk and bullying her into having casual sex. Movies about male bonding through partying (usually in the form of a bachelor party) aren’t even this morally reprehensible, and the objectification of men is just seen as good fun when there would likely be outrage if the gender roles were reversed.

The reunion between friends takes place in New Orleans for the annual Essence Festival, a real life music festival that celebrates black women, providing the film excessive amounts of footage from the film to pad the run-time and add numerous cameos that are completely void of substance or relevance to the narrative. Mostly, however, the music festival and New Orleans setting are simply excuses for the characters to get sloppy drunk and horny. There is a huge disconnect between this and the idea that Ryan is an empowering key note speaker to crowds of inspired African American women, as the film is far more interested in cheap exploitation.

Beyond the contradiction in the message and the content, there is simply a laziness to much of the humor written in the Girls Trip screenplay, relying on the cheapest possible laughs at every turn. The only saving grace of the film is the cast’s clear chemistry with each other. Even when the material is contrived and predictable, it is still clear that the actresses are having a good time with each other in the filming process. This can be contagious, and moments of the movie are sincerely fun as a result, though the two-hour run-time quickly wears out its welcome, mostly due to unsuccessful running gags, including far too many involving discussion of an over-sized penis.

In case two hours isn’t enough for the crudely written jokes that are directed at middle-aged women with the maturity of teenagers, the Blu-ray release comes with plenty of additional footage. There are deleted scenes and outtakes, every bit as sophomoric as the film itself. Also included are a handful of behind-the-scenes promotional featurettes, including one about the Essence Music Festival, an extended performance from Ne-Yo, and a director’s commentary by Malcolm D. Lee. The Blu-ray release also comes with DVD and Digital HD copies of the film.