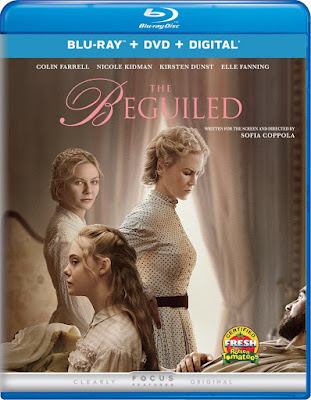 Coppola is the type of director that always feels ostentatious, even when the filmmaking is modest. The Beguiled makes little effort for achieving attractive cinematography, cares little about keeping the pace up, and spends all efforts creating a world that feels entirely lived in rather than giving the audience reason to care about any of what happens in it. It’s just too bad we can’t see half of the production designer’s work within the under-lit scenes. It is even more unfortunate that the film’s greatest efforts are buried beneath the lighting, because the meandering pace of the narrative provides little else to be engaged by.

Taking place in a secluded girls’ boarding school within earshot of a Civil War battlefield in Virginia, The Beguiled follows the exploits that occur after a wounded Union soldier is taken in. Corporal McBurney (Colin Farrell) is treated as a burden and somewhat of an enemy when he first arrives, though the presence of a man in the home filled with women instantly changes the dynamic. Each of the women gradually lose control of all rational thought in the company of a male figure, in a surprisingly sexist depiction of female carnal urges and the pettiness of jealousies that follow when several women desire the same man.

With all of the other men away at war, the house of women becomes enchanted by the arrival of McBurney, though each handles it with varying levels of repression. Headmistress Miss Martha (Nicole Kidman) treats him as a prisoner of war, but eventually comes around to his presence as though she has been seduced. Blooming teenager Alicia (Elle Fanning) is much more direct in her flirtations, but the Corporal expresses his desire for Edwina (Kirsten Dunst) when they are in private. This web of desires inevitably turns deadly, though it occurs in the least exciting way imaginable.

The Beguiled isn’t ever completely boring, but it is often frustratingly pretentious for no discernable reason. The narrative begs for a bit more pulp, but instead Coppola attempts to make the film more sophisticated. There are few thrills to be found in this approach, and even if the outdoor scenes are beautifully shot, the darkness of nearly every indoor scene makes it difficult to discern between the various blonde characters. Perhaps this, if for no other reason, was why it might have been a good idea for Coppola to refrain from the whitewashing of the source material. Or at the very least, she could have made an effort for more of a variety in the whiteness.

The Blu-ray release of The Beguiled comes with a DVD copy and a code for a digital copy. The special features on the disc include two behind-the-scenes featurettes: “A Shift in Perspective” and “A Southern Style.”