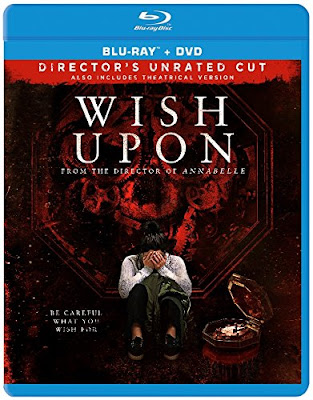 The plot of Wish Upon is destined to utilize the “be careful what you wish for” tropes when a teenage girl named Clare (Joey King) is given a mysterious Chinese box by her dumpster-diving father (Ryan Phillippe). At first Clare doesn’t realize what the box does and accidentally makes a wish that ends up coming true. Once she discovers the connection, Clare begins to use the box to improve her social standing at school, partly by improving her financial standing. There is a price to this newfound power, however, which is where the elements of horror take over the typical wish-fulfillment fantasy.

Conveniently friends with a classmate whose sister studies ancient Chinese, Clare is able to translate the writing on her box. She finds that there is a blood price for each wish that she makes, which is why the people around her have begun to tragically die in creative ways. This is the point that the each subsequent event becomes completely preventable, and also when Clare’s character begins acting in a way that will continue the plot, even if makes little sense. The pattern continues, until an unsurprising resolution, sold as a twist to those who can’t be bothered to pay attention.

The only real enjoyment in the film is the death scenes, which are basically just blander versions of the creative accidents that made up the Final Destination franchise. There is no villain, and the only person who can really be blamed is Clare, especially once she knows the consequences but continues to make wishes. The Blu-ray release includes an unrated director’s cut, but even that remains safely in the PG-13 territory. Even when the deaths are gross, they are never gruesome. The theatrical cut is also included, though there is only about a minute’s difference between them.

The Blu-ray release also comes with a DVD copy of the film, both of which have an assortment of special features. There is a fairly pointless featurette of the cast discussing what they would wish for if they could, as well as an attic tour with King. There is also a promotional featurette with director John Leonetti and the cast talking about the development of the film, but the most creative extras are two motion comics about previous owners of the box.