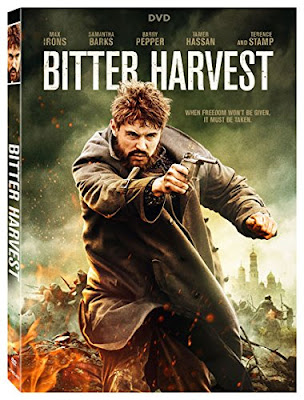 Set in Ukraine during the 1930s, during which the territorial ambitions of Joseph Stalin and the growing Soviet Union led to a genocidal famine that killed millions of Ukranians, Bitter Harvest follows the trials of an artist named Yuri (Max Irons). Yuri belongs to a long line of Ukrainian soldiers, including his legendary grandfather (Terence Stamp), and a father (Barry Pepper) who was killed when he resisted the Soviets. But rather than following in their footsteps, Yuri is a romantic who would much rather spend his time painting his lifelong love, Natalka (Samantha Barks), until they are separated by the Holodomar.

As Yuri struggles to endure the punishment of Soviet imprisonment, Natalka is forced to fend off the advances of an insistent Soviet soldier (Tamer Hassan) and the risk of starvation. While their suffering is palpable, it often feels as though the struggles of millions have been trivialized into a small-scale melodrama. Some of this may be due to budgetary restrictions, which can be seen in the film’s few scenes of resistance, but the problems start with the focus of the script. The screenplay by Richard Bachynsky-Hoover and Mendeluk seems to imply that the separation of lovers is more significant than the millions of lives lost to starvation, and portrays the narrative as more of a swashbuckling adventure where our heroes can fight back, rather than the unbalanced atrocity that it was. In an effort to make the film’s fiction more exciting, the filmmakers seem to have lost sight of the tragedy that actually occurred.

The special features on the DVD only include a photo gallery of the production, wasting yet another opportunity to shine a light on the actual events via featurette.