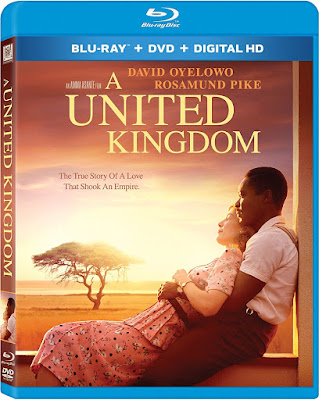 The performances are what carry the film, even when the film feels a bit perfunctory. There is little work in the meet cute between Seretse Khama (David Oyelowo) and Ruth Williams (Rosamund Pike). She is a humble clerk from a working class family and he is the prince of Botswana studying law in Britain, but their union feels natural due to the collaboration of the leads, often saving the film from an uneven screenplay. There is little to no conflict in their actual relationship; from the moment they are joined, it is clear that they are committed to a life loving each other. The drama of the narrative comes from the outside world unwilling to accept their union.

This first comes in the form of run-of-the-mill racism in Britain, primarily by average citizens shocked at the sight of a white woman in love with a black man. Even Ruth’s family disowns her in the decision to marry Seretse. Unfortunately, this is only the beginning, as the people of Botswana have nearly as much difficulty accepting their future king taking a white woman as his bride. And even as the people of Botswana begin to accept their new queen, and Ruth’s parents eventually come around, the British government uses the controversy to fuel their own political agenda against Seretse. By pushing the rightful king out of Africa, the British government hopes to gain control over newly discovered mineral wealth in Botswana.

These conflicts keep Ruth and Seretse apart for many years, and the film begins to lose its impact and direction as it struggles to include each step of the true life journey. The romance of these two people clearly had an incredible impact on history, but the effort to portray that cinematically often takes away focus from the heart of the film, which is the connection that they shared. While the story is truly touching, it is Oyelowo and Pike who breathe life into an otherwise by-the-numbers cinematic experience.

The Blu-ray release comes with a DVD and Digital HD copy of the film, which will suffice in a pinch. There is not enough visual storytelling (or even beautiful photography of the African landscape) to truly make use of the high definition presentation. The special features include a featurette on the locations of the shoot in Botswana, many of which were the actual places that the events took place. There is also a more generic promotional making-of featurette, as well as one about the real Seretse and Ruth. The last extra is footage from the London Film Festival premiere of the film.