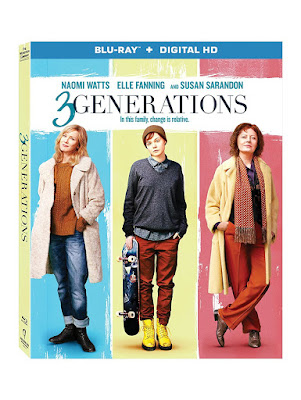 There is no shortage of problems with 3 Generations, but it all starts with the characters. Teenager Ray (Elle Fanning) was born Ramona, but has identified as male since she was 10-years-old. This seems young to me, but I am not well-versed enough in these topics to know if that is common. Add this to the list of things that the film could have addressed, rather than the petty melodrama it instead chooses to focus on. Ray is instantly a bit unlikable as a typical know-it-all teenager, but that has little to do with her gender identity and more with her age. Somehow the film never asks Ray to grow or develop at all, the way nearly every other film protagonist must, because that might imply that she is not perfect. The problem with this approach is that it goes too far. Transgender people are still human, and therefore are both flawed and capable of growth. The refusal to hold Ray to these basic standards is insulting in itself.

But the main reason that Ray has no development throughout the film is not only because he is poorly written, but because this insultingly bad screenplay by Nikole Beckwith and Gaby Dellal chooses to make Ray’s mother the protagonist instead. Maggie (Naomi Watts) is somehow even more immature than her teenage daughter, making the film all about her horrible mistakes and inability to own up to them. Without going into details which could be considered spoilers, the story behind Ray’s conception is unforgivable beyond the fact that it completely hijacks the narrative from Ray’s decision to transition from female to male. The only reason that it even comes up is due to the fact that Ray needs her father’s signature in order to get the sex change procedure done, but that becomes a minor conversation compared to the one about Maggie’s treatment of Ray’s father. If Maggie is intended to be the protagonist, this portion of the film makes her completely unsympathetic, and therefore unworthy of that central role. Not to mention how casually it pushes Ray to the side of the narrative. The film was originally called About Ray, but I can see why they changed the title, as this film is far more about Maggie than her child.

Ray and Maggie are two of the generations from the title, with Dolly (Susan Sarandon) making up the third as Ray’s grandmother. Just to make sure that the politically correctness has been properly shoved down the audience’s throat, Dolly is also a lesbian in a long-term relationship with live-in girlfriend, Frances (Linda Emond). As obnoxiously contrived as this is, Dolly and Frances may be the only well-rounded characters in the film. They aren’t given much to do other than be there as the voices of reason, but it is far better than enduring the cliché YouTube videos and arrogant attitude of Ray or the immature whining of Maggie. The closest Dolly and Frances get to a storyline of their own is their decision to ask Maggie to finally move out of their home to find a place of her own. Maggie accuses them of “breaking up” with her, in a typically irritating example of her character and the poor attempt at humor in the dialogue written. Sarandon deserves much better than this film. This topic deserves much better. Audiences deserve better.

The Blu-ray is as poorly constructed as the film itself. The trailers before the film are all oddly outdated, even including one for a film that is several years old. The actual special features only include unnecessary deleted and extended scenes, once again wasting opportunities by not including a featurette on transgender/sexual issues which could have educated those with questions. A Digital HD copy of the film is included.