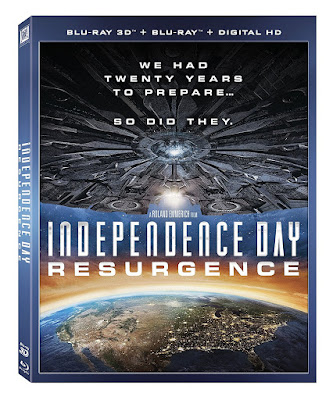 I went in expecting to hate this film, and instead filled my eyeballs with distractingly colorful imagery and a forgettable re-treading of the same material. If nothing else, this is the same mediocre film rehashed with new special effects for another generation, though the same could be said of The Force Awakens and any number of other franchise revivals in recent years. These movies are safe, and that ends up being their greatest asset and simultaneously their Achilles heel.

Although Will Smith refused to return to this franchise, they get around that by simply killing off his character and replacing him with his son, Dylan (Jesse T. Usher). This also allows for other young actors to fill in roles as fighter pilots, often making this feel like another in the long string of young adult apocalypse narratives. Jake Morrison (Liam Hemsworth) is one of these characters as a hotshot pilot in a longtime rivalry with Dylan. In case that was not enough of a connection, Jake is somehow also inexplicably dating the former president’s daughter, Patricia Whitmore (Maika Monroe). Despite all of the effort to bring back original cast members, the casting of Monroe was shamefully done in order to replace Mae Whitman with a prettier blonde actress, which is far more despicable than the decision not to include Will Smith because of his $50 million paycheck.

President Whitmore (Bill Pullman) has lost his mind since the first film, somehow mentally affected by his close encounter with the aliens even though David Levinson (Jeff Goldblum) was far closer to them and appears as clever as he ever was, providing most of the film’s successful humor. This mental connection also allows Whitmore to anticipate the return of the aliens, whereas Levinson comes to the same conclusion through scientific discovery. The younger cast then takes over the narrative to do the fighting in place of these veterans.

When the aliens do come back, they arrive in a ship that is large enough to make the scale of the narrative seem ridiculous at times. Even with all of the thoughtful consideration of an alternate timeline in which all of the countries of Earth are joined in a common goal, Resergence is consistently dumb. This is how much of this sequel plays out; just enough done right to make the flaws that much more noticeable.

Shorter in length than the original film, Resurgence takes less time building up to the action, instead sprinkling the entire run-time with a decent balance of humor and spectacle throughout. Considering director Roland Emmerich has made a name for himself in the disaster movie genre, it is actually surprising how much restraint that he often shows. Even the final showdown is broken down into stages and is inter-cut with the journeys of each new character collected along the way, so that it is not just an onslaught of CGI. That doesn’t necessarily make up for all of the other shortcomings, but there are certainly worse ways to pass the time.

The 3D Blu-ray combo comes with a 2D Blu-ray disc and a Digital HD copy of the film. The 2D Blu-ray also comes with over an hour of special features and a director’s commentary track. Extras include a four-part making of documentary, deleted scenes (just over 8 minutes worth) with optional commentary from Emmerich, a gag reel, concept art, and a faux news segment about the events within the film. The 3D itself is fun in a few different sequences, though a number of the space sequences will only be as effective as the size of your television allows.
Entertainment Value: 7.5/10
Quality of Filmmaking: 6/10
Historical Significance:  3/10
Special Features: 8.5/10