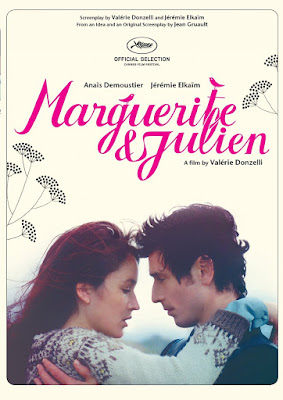 Told through unnecessary narration as an erotic fairy tale for a group of very young girls in what appears to be an orphanage, Marguerite & Julien is about the incestuous relationship between aristocratic brother and sister in 17th century France. The story begins with their childhood, though the film obnoxious treats them as adults at even a young age, allowing their romance to blossom before they reach their teens. I can’t stand when child characters are presented as able as adults, and this film lost me early on when young Julien unrealistically rescues his sister from a ride on a runaway horse in sequence of romantic cliché at its worst. After being separated for many years, we rejoin Marguerite and Julien (played by adult actors Anaïs Demoustier and Jérémie Elkaïm) as they reconnect with each other. Their romance begins again, despite a lack of any convincing chemistry between the leads.

In all fairness, Demoustier is instantly captivating. There is something about this actress which feeds the energy of any given scene, demanding the attention from the camera that only a movie star deserves. She has a natural quality which is instantly enigmatic, even in this slog of a film and despite having a co-star with as much charisma as a cardboard cutout. Although he co-adapted the screenplay with Donzelli, Elkaïm by comparison seems completely out of place in each scene. He certainly looks like an attractive young model, but it almost feels as though this is Elkaïm’s first time on set and he hasn’t yet figured out that being handsome isn’t enough to retain audience interest. While Demoustier tries in vain to breathe life into the insipid material, Elkaïm mostly just mugs for the audience, resulting in an off-balance cinematic pairing in no way conducive to romance.

The premise itself is difficult, to say the least. Very few filmmakers would have had success making incest appear romantic, but Donzelli muddles it even further with period incongruity and stylistic indecision. She can’t seem to decide whether this is a period film or a parody of the period in which Truffaut was originally intended to adapt the narrative. For much of the film it feels as if the story takes place when the actual events unfolded, but there are random sprinklings of modern intrusions. Despite taking place in the 17th century as the setting and wardrobe would suggest, Julien is equipped with a camera that looks as though it belongs in the 1970s. Towards the end of a film which has shown horseback, carriages, and boats as the primary mode of transportation, a modern helicopter suddenly shows up to take away our protagonist. These alterations are so randomly sporadic that they feel more like error than stylistic choice. Donzelli doesn’t seem to be saying anything with these moments and by comparison it even makes Sophia Coppola’s treatment of Marie Antoinette look like a masterpiece. Considering how much I disliked Coppola’s film, this is actually quite impressive, but in the worst possible way.

The only special feature is a trailer.