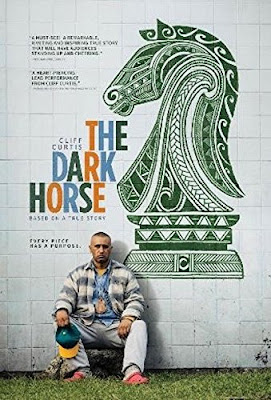 The Dark Horse doesn’t just utilize one formula, but rather several at the same time. There is the story of mental illness in the struggles of protagonist Genesis Potini (Cliff Curtis), family drama as he rebuilds the relationship with his brother Ariki (Wayne Hapi) after being released from a mental institution, and the inspirational underdog tale told through the inner city kids that Genesis leads in a chess club. The relationship at the center of the film, however, is between Genesis and his nephew, Mana (James Rolleston). Pessimistic about the realities of what the world has to offer his son, Ariki pushes to have Mana initiated into the violent gang he is a member of, though the young man begins to show an interest in the positive path that Genesis has begun to take in the impoverished community. Competition in a National Chess Championship offers a glimpse of hope and self confidence that the young man is unaccustomed to seeing in his daily life.

At just over two hours long, The Dark Horse may be a bit more film than the content calls for. Some of the sequences begin to feel redundant and this mostly seems to be a way to showcase Curtis’ dedicated performance as the beloved real-life person he is portraying. The actor gained a great deal of weight and stayed in character during the shoot, but this doesn’t necessarily make up for the amount of time that screenwriter and director James Napier Robertson spends dedicated to his mental struggles. There is a fine line between the portrayal and the exploitation of events, and sometimes it feels as though Robertson revels in the darker elements in order to pad the central performance with some showy sequences.

Even with some of its cinematic shortcomings, The Dark Horse is an enjoyable film. The predictability of the screenplay is easily forgivable because of how well the characters are fleshed out by the performers. We can believe in the people within the story, which makes accepting the cliché plot devices far easier. And the positive message is something to be embraced, even if it occasionally comes off as unrealistically idealistic. My only suggestion is to watch the film with subtitles. Although some of the dialogue is already subtitled to help the audience, many of these lines were oddly the ones I needed to assistance to understand, while more difficult sections of Gen’s ramblings are left for audiences to struggle with. Thankfully, this DVD provides optional subtitles for all of the dialogue.