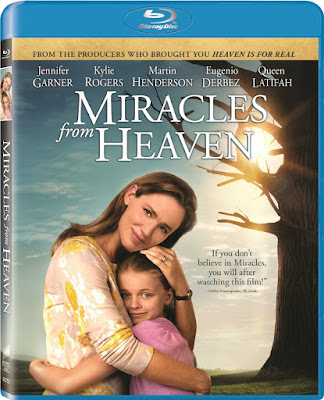 Both films begin with a sinlessly sweet country family meant to endear Middle America before hammering them with a medical emergency involving one of the youngest members. While Heaven is for Real focused on the relationship between father and son, Miracles from Heaven spends a majority of the screen time with Texas mother Christy (Jennifer Garner) and her ailing 10-year-old daughter, Anna (Kylie Rogers). After discovering that Anna suffers from a rare and incurable digestive disease, Christy dedicates much of her time seeking the best possible medical attention. The maternal devotion displayed in Garner’s performance is the glue that holds the film together, much like Greg Kinnear was able to do for Heaven in for Real. The greatest assets that these faith-based films have are the skilled actors willing to attach themselves to the project, saving them from the amateurish performances which they are typically plagued with. Some of smaller roles are still cringe-worthy, but far fewer than those of the past, with other accomplished actors such as Queen Latifah as support. Even the child actors in Miracles from Heaven show an improvement, despite some awkwardness with a clunky screenplay.

The faith-based film industry often makes the mistake of assuming that the financial success of these films is evidence that audiences just want more of the same, and it is nearly unforgivable how many similarities this film shares with Heaven is for Real. They both rely on the unbelievable skepticism of certain congregation members as nearly the only source of conflict between characters, give each sick child a brief view of heaven despite neither technically dying, and both even share butterflies as a visual symbol for the film’s themes. Even if these were already a part of the supposedly true stories before filmmakers became involved, much of Miracles from Heaven feels like a calculated copycat of its predecessor from the same producers.

The biggest problem with the imitation method of filmmaking are the areas that never seem to improve fast enough. I don’t know if it is out of obligation to only hire crew members who have faith themselves or simply a laziness of craft, but there are many technical sides to the film which are infuriatingly sloppy. Director Patricia Riggen handles the melodrama with a level of competence, though much of this has more to do with the effectiveness of the casting, while happiness and humor in the film come off more forced than a Hallmark commercial. This not nearly as frustrating as the film’s editing by Emma E. Hickox, however, mostly because her experience should have resulted in a better end product. The passage of time is difficult to comprehend, especially with the film’s unabashed love of shoddily constructed montage sequences. The over-reliance on cross-fading is absolutely amateurish, especially when paired with footage of the Christian band Third Day as the worship leaders at the family’s small-town church. It plays more like a poorly constructed music video made by an unskilled film student than a narrative feature cut by a second-generation film editor with dozens of credits to her name.

No one is more frustrated than I am by the number of problems with Miracles from Heaven, especially considering how much better it is than most faith-based films. This is a vast improvement, but that hardly means that it is enough. If these films continue to improve, eventually they may serve audiences of skeptics and believers alike. For the time being, at least they offer a relatively well made product while preaching to the choir.

The Blu-ray release comes with exclusive deleted scenes and footage with the real family the events are based on. The end of the film also shows us this family, which is heartwarming despite showing Hollywood’s bad habit of casting thinner actors than the real-world counterparts. Also included in the special features is a commentary track with director Patricia Riggen and screenwriter Randy Brown, a making-of featurette, a faith-based featurette for the faith-based film, a featurette with concept art for the heaven sequence, and another terrible music montage that was graciously left out of the movie itself. The Blu-ray release also comes with a Digital HD copy of the film.