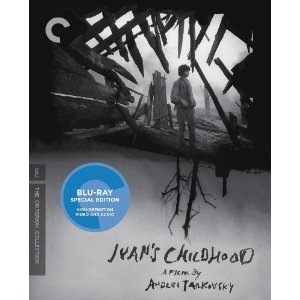 Andrei Tarkovsky is one of the world’s great film directors, one sure to come up in any good international film class, but this isn’t likely to be the film mentioned with his name, but that just makes it a gem to be discovered on your own. This is his debut film, and an incredible accomplishment both in the stark visions of war and in the visual splendor.  The film begins with a serene scene in which Ivan is walking through the woods with his mother, even seeming to become a butterfly momentarily and fly away, but this peaceful episode is just one of many dreams that Ivan has within the harsh realities of his true war-torn childhood. Having lost his family to violence already Ivan is working as a reconnaissance agent in dangerous areas of war and battle. When Germans are at his meeting point he continues on by himself and barely makes it to the base camp, and upon arriving the commanding officer doesn’t take him seriously at first because of his age, which is ironic considering how young the actor thy cast as the commanding officer is as well.

When Ivan’s commanding officer tries to send him to military school as a way to get him out of the war he insists that there is still much he can do to help win the war, and refuses to leave his command. As they continue on in the direction Ivan has scouted for them, he continually tries to run away for refusal to leave his job for the safety of military school. He isn’t a patriot as much as he desperately seeks vengeance on the lives of his family members, even planning out his attack and final demise and acting it out as a child would, but with the conviction of a grown adult. Finally they come to realize that Ivan’s chances are far greater than any other considering his small stature and ability to hide easily, and so Ivan once again goes out on a dangerous mission.

Ivan’s Childhood is a film of poetic sadness and beauty. There are many moments of absolute bliss which are always invaded by reminders of war, whether trenches as a reason for romantic interlude also interrupted by gunshots or one of Ivan’s peaceful dreams always ending with the symbolic or physical death of his family. Even in the significance of this small boy being sent out by men twice his age, able to do what they cannot and still unable to shake the affects the war has had on him. The loss of his family haunts him the entire film, a magnificent tortured child who has experienced far more than many men ever do in their lifetime.

The Blu-ray release includes and essay in the booklet by film scholar Dina Iordanova as well as translated essays of Tarkovsky about Ivan’s Childhood. The booklet even has a poem written by Tarkovsky’s father. On the disc there is a video appreciation of Tarkovsky and new video interviews with the cinematographer Vadim Yusov and actor Nikolai Burlyaev.