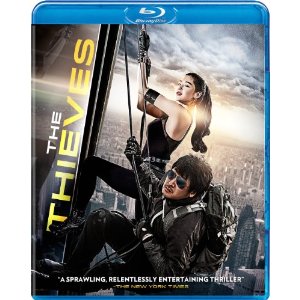 The Thieves has a complex plot with twist after twist, an extremely large ensemble cast, and a running time just over two hours and fifteen minutes. It plays somewhat like a more dramatic and complicated Ocean’s 11. So, I guess I’m saying it plays like Ocean’s 12. There are points in the film where the overblown cast and storylines go off-track a bit, and at times it is difficult to keep up with the many twists in the storyline. It is also often difficult to recover from the emotional whiplash, as the story jumps from comedy to melodrama and back again from scene to scene. All of this into consideration, The Thieves is still a remarkably worthwhile trip to take. It may not be a smooth ride, but it is a trip worth taking once the destination is reached.

The ultimate destination in The Thieves is the same as Ocean’s 11, The Sting and every other great grifter film. What is more important than the protagonists getting away with their scam/theft is the fact that they do it in a way which proves they are more clever than their adversaries, and the audience. We must be fooled along with the mark, and The Thieves delivers this scenario several times throughout the film, leading up to the largest reveal at the climax of the film.

The basic premise of this film is a group of con men and thieves teaming up for a major score, a 318-carat diamond worth 20 million dollars. They have two safecrackers to open two different safes, muscle for the strenuous parts of the job, and the ever-important disguise man. But underneath this traditional con film is a revenge movie, as two of the members of the crew have a past, which includes a love triangle with a female member of the crew.

The Thieves currently holds the place for highest-grossing film in Korean box office history, which is easy to see with the scope of this film. There is a great deal to enjoy in this film, though it may be a bit bloated for the tastes of American audiences ignorant to the celebrity of the cast members. I believe most of what made the Soderbergh Ocean 11 franchise successful was the cast of incredible talent and stars, but this would not translate as well for someone who didn’t know Matt Damon from Brad Pitt.

The Blu-ray release includes a making-of featurette, as well as one about the individual cast members in this largely ensem